Havana Through the Eyes of a Russian, 2018

oil and pastel on canvas

oil and pastel on canvas

Piki Mendizabal was born in La Havana, Cuba in 1982. Mendizabal began drawing at an early age, but his real artistic journey started in 2002 when he took his first art classes.  From 2002 to 2006 he took classes at La Casa de Cultura in Old Havana. His dedication earned him admittance to the Academy of Fine Arts San Alejandro, where he attended from 2006 to 2008. During his time at the Academy, Mendizabal tried many forms of artwork, but ultimately, he found that he could express himself best through a painter’s palette. At this time, he met Nicolas Alayo and Jose Baro who both served as important mentors. Alayo taught Mendizabal about the intricacies of Cuban culture, while Baro developed his painting techniques.

In April of 2008 Mendizabal emigrated to Homestead, Florida. He had his first solo show, Suenos de la Libertad, in 2009 at the Zu Gallery in Miami. Seeking a city more familiar to his home, Mendizabal moved to New Orleans in 2010 where he currently resides. For the past three years he has taught at the International High School of New Orleans. His most recent solo show, Reflection and the Diasporic Epic, was held at the Mexican Cultural Institute in 2018.

My art belongs to the Old Havana of Cuba. It is my fountain; everything that I paint comes from there. It is a huge part of me, just like my painting. Since I was a boy, I have always had a sensitivity to art; as a child I was always drawing and creating. But as I matured I realized that I had a need to express more. Some people express with music, others dancing, but I found I was most eloquent with colors. It is through my paintings that I can let others into my world, a place where I am now an artist living in the United States but once was a dreamer in Cuba.

The motivation for my paintings stems from the nostalgia of Cuba and my childhood. Painting is a way to invite others into my Old Havana – the part of Old Havana that you do not find in tourist guides. When people look at my paintings they are not only seeing into my memories, but also the day-to-day experiences of each of my neighbors. Sometimes I worry that the culture that I grew up in will disappear, for what I see as light most people view as shadow. It is this fear of losing these moments that urges me to memorialize them in paint.

While I love remembering the Cuba of my childhood, I have always been drawn to the Cuba of the 40s, the time that Cuba was finding its identity through art, music, and writings. When I see the art from this decade, I am immediately transported and want to be a part of it. It is part of my nostalgia. This desire to know more about my country taught me that I love history, and I like to read. Through this I found a connection to Greek Mythology and the architecture and sculptures that go with it. There is something familiar about the emotions I feel when I see buildings and art that are falling apart.

When people look at my artwork I want them to see me. I want them to see Cuba as I saw Cuba. I want them to feel the sea – a mass of blue that, to Cubans, is seen as both a border and a bridge to our dreams. I want them to seek a glimpse of the Yoruba religion, an AfroCuban religion that is practiced by my father and neighbors. My paintings are an extension of me, and I hope that those who see them can find a part of themselves. 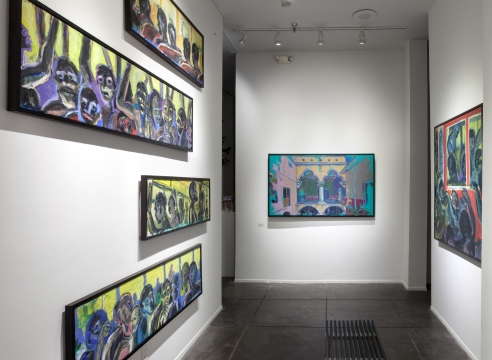