acrylic and crayon on canvas

STARSKY BRINE’s paintings and drawings captivate audiences with their distinctive style and a recurring theme, the search for the nature of humanity. In his bold works, the artist focuses on characters that are built from a combination of anthropomorphic and zoomorphic features, as well as the appropriation of elements from comics and toys from his childhood.

On the one hand, these characters distort reality to venture into an environment of subcultures and urbanism created by the spontaneous intuition of his strokes and the appropriation of the contemporary iconography. On the other hand, they move within the realm of fantasy. In particular, the animals paired with their human characters evoke associations with fairy tales or comics. They are reminiscent of the world of theatre, in which fantasy and poetry but also comedy often serve as catalysts for the creation of critical meaning.

With his works, Brines often questions the interplay of good and evil against the background of the worldwide socio-political climate. Yet Brines does not interpret his themes as ‘black and white.’ They are complex and nonlinear, with charming disruptions, quite serious and yet full of humor.

Brines is personally influenced by his mother and art historically influenced by Latin American figurative art, the German Neoexpressionism, the Italian Transavantgarde, and the COBRA group. His works oscillate between figuration and abstraction. Brines holds a degree in Fine Art from the Instituto Universitario de Estudios Superiores de Artes Plásticas Armando Reverón in Caracas.

His work has received international attention in exhibitions and has been incorporated into important collections in cities such as Caracas, Basel, Buenos Aires, Bogota, Santander, Miami, Madrid and Seoul. 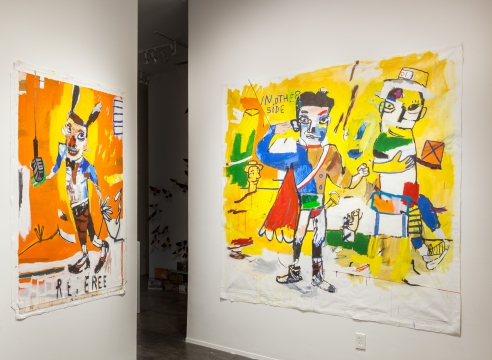