30 October 2018 (New Orleans, LA)JONATHAN FERRARA GALLERY is pleased to announce How Did We Get Here?, the latest exhibition by Cincinnati-based painter Adam Mysock.  Thirty-five new paintings tell a chronological history of annual lies spanning the artist’s thirty-five years of life, each represented by images of popular culture or art historical iconography; from portraits of Santa Claus and Richard Nixon to appropriations of Rembrandt and Vermeer. This whimsical and comical body of work boasts his trademark, miniature paintings in the style of the Old Masters with approximately 400 brush strokes per square inch and 25 layers of varnish.  The exhibition will be on view from 30 October to 15 December 2018 with Arts District New Orleans’ (ADNO) First Saturday Gallery Openings with an opening reception Saturday 3 November and a second reception on 1 December from 5 - 9pm.

The artist elaborates on the inspiration for these paintings . . .

How do we learn to lie?

Who teaches us this skill?

And when do we learn it?

My answer is that I’m self-taught. I’ve been learning this craft my entire life. And I don’t believe I’m unique in this.

As children, our elders generally steer us away from lying; it’s just not something good kids do. It’s certainly not a skill typically taught in school. Lying is commonly considered an indecent behavior, so there really isn’t anyone out there directly training us to do it. But we all know how to lie. More often than not, it’s something we teach ourselves.

Over the years, I’ve made any number of mistakes that have provided me with a foundational awareness of what lying is and the actions required to do it. I’ve knowingly twisted the truth, gotten caught by some authority figure, righted my ways, and then fallen back into lying again just as soon as my underdeveloped judgment could lapse. I’ve studied historical figures whose misdeeds simultaneously taught me that lying was bad and how to get away with it if I desire. I’ve watched nightly news reports about criminals and politicians, and I’ve become fairly fluent in how lying functions in our world.

Each engagement with lying has offered me some small lesson about the different categories of lies (lies of omission, lies of commission, lies of influence, etc.). And I’ve learned about the spectrum of severity that sets one lie apart from another: from harmless, soothing fictions to dangerous conspiracy theories. But perhaps most importantly, I’ve discovered that there are circumstances when a lie seems more appropriate than an unflattering truth, that the merits of lying endure with a degree of nuance included.

How Did We Get Here? exists as a catalog of the many teachers, stories, gestures, and influences from my own lying education. From early players like the Easter Bunny and Santa Claus to more recent influences like a 24-hour news cycle and online “bots,” I’ve recorded figures who’ve proven influential in my ability to falsify. I’ve recorded figures who’ve prepared me to think more critically in an era increasingly shaped by dishonest narratives. Each piece is painted with a certain degree of dramatic lighting or color, but none are painted critically. This is simply a record of those people and ideas who’ve made me a more-savvy connoisseur of lies.

For me, the decision to utilize the portrait miniature format (a format historically reserved for images of cherished loved ones) focused attention on the increasing level of importance that the skill of lying has gained in contemporary understandings of success. These liars and symbols replace paintings of my ancestors and become a new lineage for a modern world where situational morality has replaced the idea of an unconditional moral code. They become a fresh set of forefathers for me, as I find myself advancing further into an age where the best liars gain the most power.

One thing this body of work can’t do, however, is settle questions about the ethics of lying. It might begin a conversation about the harm lying can cause or its necessity in a peacefully functioning community, but it cannot designate lies, lying, or liars as entirely good or entirely bad. These figures persist in our culture and will continue to do so. The best we can do is to take inventory of the good and bad influences in our past and present and shape a preferable future by acknowledging the advantages of our least virtuous ancestors and overcoming the restrictions of our most just counter examples.

Adam Mysock was born in Cincinnati, Ohio in 1983 - the son of an elementary school English teacher and a lab technician who specializes in the manufacturing of pigments. On account of a steady stream of folk tales from his mother, his father's vividly dyed work clothes, and a solid Midwestern work ethic, he developed an interest in painting and drawing all things Americana from a very early age. Mysock earned a Bachelor of Fine Arts degree in Painting and Art History from Tulane University and an MFA from Southern Illinois University at Carbondale.

After his studies, he became the mural coordinator for the City of Cincinnati's MuralWorks mural program and worked as an adjunct drawing professor at Sinclair Community College in Dayton. In the summer of 2008, Mysock became a Professor of Practice at Tulane University and in 2015 he returned to his native Cincinatti to paint full time. Mysock's work has been exhibited in Ohio, Kentucky, Illinois, Georgia, Mississippi and Louisiana and is in private collections across the US, including those of 21c Hotel and Museum, Beth Rudin DeWoody, SØR Rusche Collection, Oelde/Berlin, Ruslan Yusupov, Thomas Coleman and Michael Wilkinson. He has been a jury winner in the annual No Dead Artists juried exhibition and awarded first prize “Best in Show” in the Ogden Museum’s Louisiana Contemporary Annual Juried Exhibition. Mysock’s work has been featured Pulse Miami, VOLTA NY and in Basel, Switzerland as well as art fairs in Houston, Seattle and San Francisco.

He was selected for the 2013 Edition of New American Paintings and his work was featured in a Baroque and Contemporary group exhibition from the SØR Rusche Collection, Oelde/Berlin at Kunsthalle Jesuitenkirche as well as in a solo exhibition entitled When Everything Was Wonderful Tomorrow at Galerie Andreas Binder in Munich, Germany. His work was also featured in EXCHANGE, an international exhibition at Galerie Jochen Hempel, Berlin and the following year reinstalled in Leipzig, Germany. Most recently he was selected as one of two recipients of the fifth Manifest Artist Residency (MAR) Award upon his return to his hometown. Mysock currently lives and works in Cincinnati, Ohio. 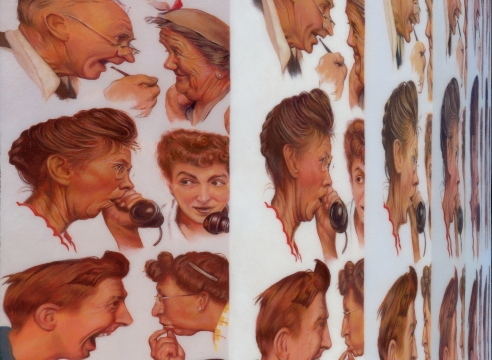