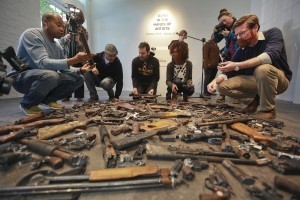 New Orleans, LA — A contingent of visual and literary artists is working to get guns off the streets and onto canvases as part of an exhibit to raise awareness about gun violence.

Local artist and gallery owner Jonathan Ferrara has commissioned a group of 27 painters, sculptors, poets and filmmakers to create works of visual art using guns as their medium for his Fall exhibit, Guns in the Hands of Artists.

The exhibit is a reprisal of Ferrara’s 1996 exhibit which was hosted at his first gallery, Positive Space. It was conceptualized by Ferrara and colleague Brian Borrello in the early 90s in response to the city’s high crime rate. Now, Ferrara hopes that the exhibit will help to encourage communities to have open discussions about the issue of gun violence, and “to take the conversation about guns out of the polarized, politicized arena and bring it into the realm of art.”

“Awareness is critical,” Cantrell said. Cantrell says that her district has the highest percentage of incarcerated citizens and that its to her district that they return after release. As such, she’s eager to get in front of the issue.

“We have to confront gun control laws in-state and federally.” She, too, hopes that a larger conversation will be created from the art installation.

“I’m looking at it how to help us collectively and holistically,” Cantrell said.

The 186 guns the artists will be using were procured in partnership with the City of New Orleans and the New Orleans Police Department through its gun buy-back program.

“This is the first time we’ve ever dealt with an artist,” said Earl Johnson, CE&P’s Weapons Control Officer. “Normally, the guns are incinerated.”

According to Johnson, “every weapon (for the exhibit) was tested and cleared of any links to previous criminal activity, then destroyed to the point of non-use.”

For some of the artists participating, gun violence is more than an abstract social issue, such as Deborah Luster whose mother was shot five times, and Adam Mysock, who, in 2004, witnessed through the window of his Central City home, the murder of an unarmed 16-year-old.

“The idea of gun violence in New Orleans has been way too familiar for me for way too long,” Mysock said. “When Jonathan gave me the opportunity to address that (through art), I jumped on it.”

Mysock is a miniaturist artist. For his piece, he’s contemplating painting portraits of past and recent NRA presidents in gun barrels or chambers.

The exhibit is planned to open in October of this year to coincide with Prospect 3, New Orleans’ international biennial art exhibition.

“We are thrilled that this happening at the same time as P.3,” said Brooke Davis Anderson, the executive director of U.S. Biennial, Inc., the organization that operates Prospect New Orleans. “I think the audiences that we’re going to bring to town will really enjoy this exhibit.”

Even after this exhibition closes, Ferrara plans to continue raising awareness. and working to reduce gun violence. Ferrara plans to use the proceeds from the exhibit to support the buy-back program.

“Maybe buying some guns off the streets will save some lives,” Ferrara said