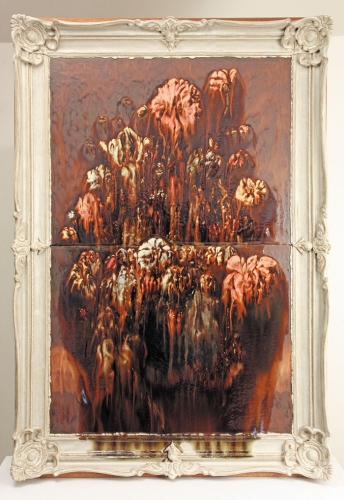 A friend sends me a link to the final blog posts of a young woman who committed suicide. "Some stranger's car radio played outro music" is one of her final lines. Tick tock.

I text a friend to ask the status of someone in a coma. "They are gonna take him off life support tonight," he texts back. Tick tock. Tick tock.

"Is there a personal reason why you turned your attention to vanitas?" I ask Dirk Staschke later that evening. The artist's brother-in-law, both parents, and son died in the span of five years. Tick. Tock.

Vanitas—derived from vanitas vanitatum, omnia vanitas, from the Bible—is a style of still-life painting that originated in 16th-century Netherlands featuring objects to remind us of the futility of our worldly existence and our imminent demise. Symbols representing death include skulls, candles, rotting flowers and food, and clocks. Jewelry, books, and maps represent our ultimately meaningless pursuit of wealth or knowledge. Why these reminders? Because we must repent, repent, repent, the Dutch admonished.

"I was interested in the pessimistic notion of futility and wanted to see if it can be translated into an artistic gesture," Staschke told me about his show Perfection of Happenstance at Winston Wachter, which is up through January 10. For the work The Structure of an Image, Staschke developed his own method of using glaze as paint, a method in which the results aren't known until after the piece has been fired. In this painting that is a sculpture that is a painting, the blurred pink, yellow, and white outlines of flowers run down the ceramic and drip over an ornate ceramic frame. A seam bisects the center where the two halves have been joined. Walk around to the back of the piece, and you can see the coiled clay outlines of the flowers. Resist gently pushing the piece off its pedestal to complete the conceptual circuit of solidity versus fragility.

The Shadow of a Doubt, a sculpture of a painting, confirms why Staschke was selected to be featured in next month's New American Paintings magazine. Tilted on a slab of wood, this vanitas contains precise symbolism that is also extended through the back with amorphous blobs. A perfectly constructed skull in front is balanced by a blue-and-white bulbous protrusion in back. While I understand the artist's impulse to activate the back of the work, I'm not convinced this particular abstraction is working. Knowing the artist is mindful of his conceptual gestures, I'm hard-pressed to grasp the connection here.

I hope Staschke further explores the abstraction he's heading toward in works like The Structure of an Image, Flux #5, and his vanitas vases. There is a haunting expressiveness to them that invites viewers to explore the messy spectrum of feelings when considering their own and their loved ones' mortality. Tick tock.