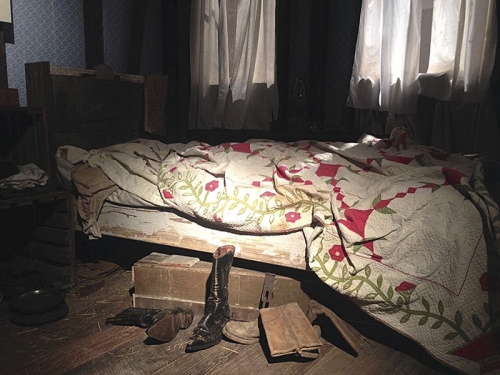 Norman Mailer once said that Marilyn Monroe “lived in a swamp of legends, lies, and factoids.” The author coined the word “factoid,” which he defined in an interview as “a fact which has no existence on earth other than that what’s appeared in the newspaper and then gets repeated for ever after.” Mailer may have first used the term in 1973, but factoids have been with us at least since the Gutenberg Bible.

And while today our national archives are filled with bona fide facts about the 16th president, the true nature of his sexuality has been obscured behind swamp gasses of propriety and innuendo. Enter Skylar Fein, an ideal artist for the Internet age, who gleefully nabs a fact here and a rumor there to create quasi-nonfictional environments. For “The Lincoln Bedroom” he has built, right inside the gallery, a facsimile of the Springfield, Illinois, general store run by Joshua Speed, the scion of a wealthy Kentucky plantation family. In 1837 Lincoln, poor and riding a borrowed horse, arrived seeking lodgings. Speed had heard Lincoln’s powerful oratory when the latter was running for state legislature, and offered to share his upstairs bed. Years later, Speed wrote about his first encounter with the future commander in chief: “I never saw so gloomy and melancholy a face.”

In Fein’s recreation of their shared bedroom, which is suffused with the gamy aromas of hay and tobacco, a sign over the narrow single bed reads, “From 1837 to 1841, Abraham Lincoln and Joshua Speed shared this bed, not by necessity, but by choice.” Fein’s research asserts that Lincoln had a more comfortable offer from a local lawyer with an extra room; other sources counter that Springfield was suffering a severe housing shortage and men (who outnumbered the local ladies two to one) were doubling up all over town. Different published sources insist it was a double bed, even “a large double bed.” Whose factoid to believe? Fein points out that although the Speed family owned slaves, they also helped to keep Kentucky from seceding and facilitated a deal to obtain much-needed rifles for the Union Army. “Did a gay relationship save the Union?” the artist challenges from the wall.

When it comes to Lincoln’s sexual preference, Fein’s facts, like everyone else’s, are up for grabs. However, Fein’s pungent silkscreen graphics and painted wood wall pieces in the adjoining gallery provide an aesthetic pulse that surges across time periods and genres. Shelves of faux men’s magazines, coarsely printed in bold hues on plywood, feature body builders, wrestlers, and other hunks. The image of a masked grappler reaching out toward the viewer is repeated on three different covers, which read, “Antiques,” “Camping,” and “Gramsci” — the last referencing an early 20th-century Marxist rabble-rouser. This triptych riffs on the way visuals combined with language can both enhance and bollix understanding. Ersatz bubblegum wrappers feature not cartoons or jokes but fragmented quotes from various sources including Greil Marcus’s Lipstick Traces, a tome that similarly elides time periods to elucidate the ever elusive present.

Fein wrote in an e-mail to me that, unlike politicians, “I took no oath. I didn’t swear to tell the truth (artists rarely do),” which reveals much about his practice of transmuting slippery facts into often humorous, always arresting visuals. Then he signed off: “There is a constituency, however; if I were to take an oath, mine would abandon me.”