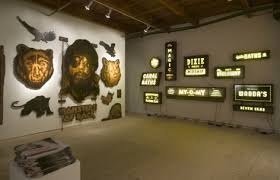 The New Orleans Museum of Art has acquired "Remember the Upstairs Lounge," a postmodern masterpiece by New Orleans artist Skylar Fein, that symbolically recalls a devastating 1973 fire in a crowded French Quarter gay bar. The 90-piece art environment that features imitation artifacts, photographs, video and a reproduction of the bar's entrance, blends elements of 1970s pop culture with grim reminders of the inferno that took the lives of 32 trapped men.

The museum has no plans to exhibit the artwork in the near future.

The haunting installation was first seen at the Contemporary Arts Center in 2008 during the Prospect.1 international art exhibit. "Remember the Upstairs Lounge" was later reassembled in a temporary showplace in New York City in 2010.

Fein said that he sees the museum acquisition as an indication of how far society has come since the deliberately set fire, which remains an unsolved case. At the time, he said, the city had trouble acknowledging the existence of gay gathering spots. Now an artwork marking the momentous fire is part of the city’s museum.

“Forty years later is not a very long time,” he said.

Miranda Lash, NOMA's curator of contemporary art, said that the piece commemorates a  tragic, but significant happening that became a rallying point for the New Orleans gay community. It also represents the most ambitious artwork by one of the city's most accomplished artists. Lash arranged for a solo exhibit of Fein's work at NOMA in 2009.

“It should be at the New Orleans Museum of Art,” she said of the artwork.

"Remember the Upstairs Lounge" is the second major installation by a Louisiana artist recently added to the museum collection. In 2011, NOMA was given Keith Sonnier's "Fluorescent Room."

Fein donated the artwork to NOMA. He said that he’d never expected to profit from the “Remember the Upstairs Lounge.” He estimates that the piece cost $20,000 to create. Showing it in New York cost another $30,000, he said. Since it’s first showing, collectors have sought to buy elements of the ensemble, but Fein declined to break up the installation.

“People wanted individual pieces,” he said. “But I really wanted to keep it together. It’s about telling a story.”

Fein said that he feels he’s been relieved of a huge responsibility for the care of the artwork and is happy it will survive intact.

Lash said that though installations such as “Remember the Upstairs Lounge” are impressive when seen as whole, they can’t be displayed often due to the space they require. There are no plans at this time to show it in the near future, but she said that she hopeful that NOMA will be able to lend the artwork to other museums.