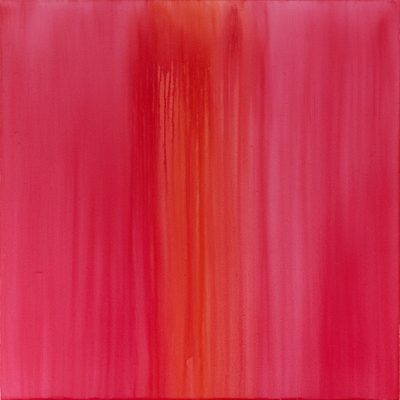 So much of color field painting—the work of Ellsworth Kelly, Kenneth Noland, Mark Rothko—has been read in terms of purity of expression, an attempt to grasp sublimity through color.  Despite its critics past and present, the aesthetic ideals continue to resonate today, as seen in Anastasia Pelias’ show “Ritual Devotion” on view at Octavia Art Gallery.

Pelias does not shy from allowing flaws, blemishes, and imperfections to enter her canvases. Rather, she embraces them, heavily working her focused palettes to create texture and depth. In paintings such as the two titular Ritual Devotion works, the bright pinks and oranges (each color poetically listed by name in her catalogue) feature streaks and smears that remind the viewer of the human hand’s place in the making of the work, grounding Pelias’ characteristically luminous works with painterly presence.

In Delphi and Paraskevi, both 2013, the most enigmatic of the works on display, the deep marine colors lend an otherworldly mood that approaches the hypnotic. In the former, the rich turquoise brings the swift iridescence of a butterfly’s wing or beetle’s shell to a calming standstill; and in the latter, Pelias’ layered, shaded greens creep quietly across the canvas like the tendrils of an aquatic plant, glowing with the quiet light of a hidden lagoon.

The two large-scale pieces on display, Ritual Devotion Two, 2013, and Elaine, for Elaine, 2013, are more overtly ambitious, but with mixed results. Ritual Devotion Two enjoys a productive boundary line between its red and cobalt panes, with that interface between the colors resembling the microscopic striations found in living tissue, down to the level of individual droplets of paint echoing cells. More aggressive is Elaine, for Elaine, whose colors seem angrier and less harmonic, and whose labored greys feel out of synch with the rich chromatics of the other works in the show. But perhaps this is what Pelias is suggesting: that such emotion rendered in physical form should unsettle; that the textures of making, her brush raking the paint like dirt, must always be visible; and that such flaws are less flaws than what make us human after all.