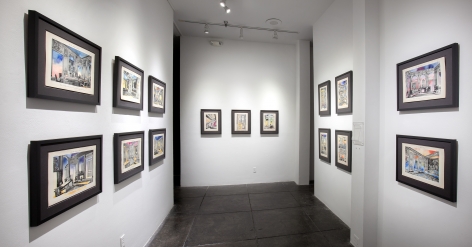 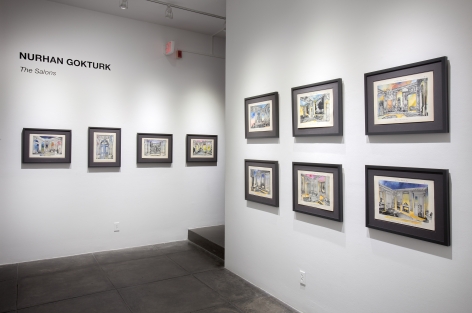 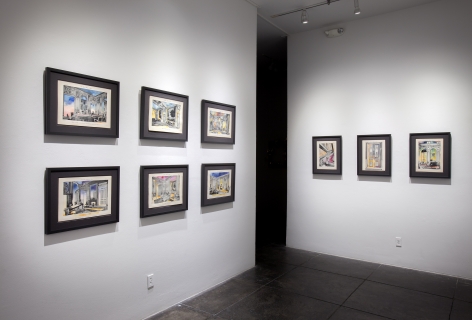 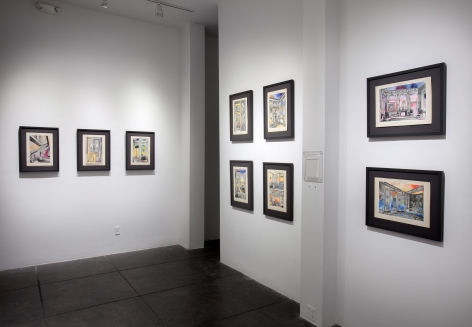 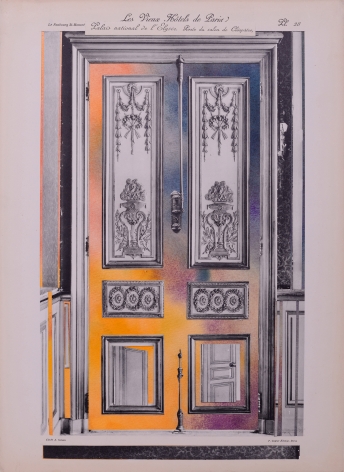 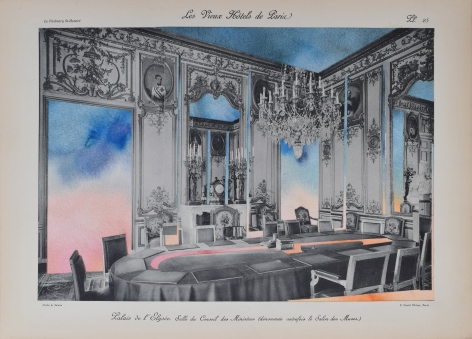 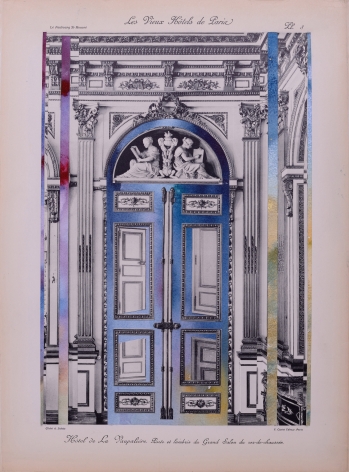 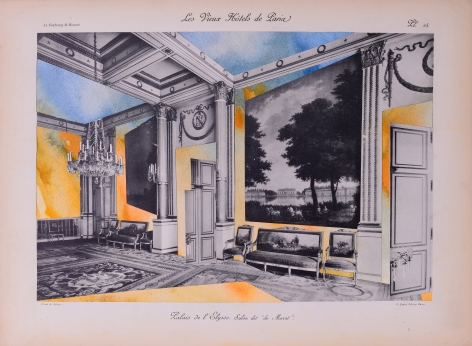 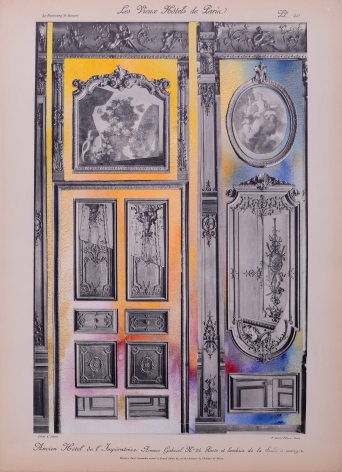 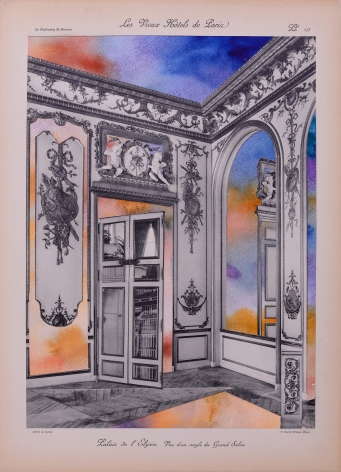 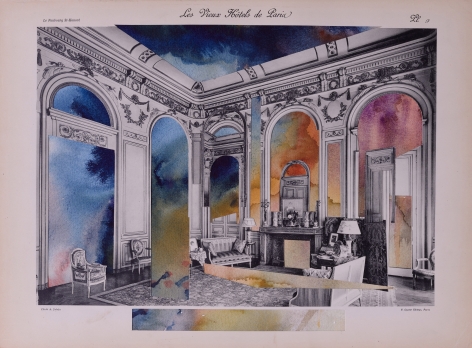 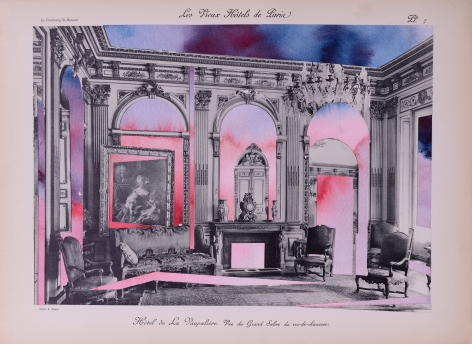 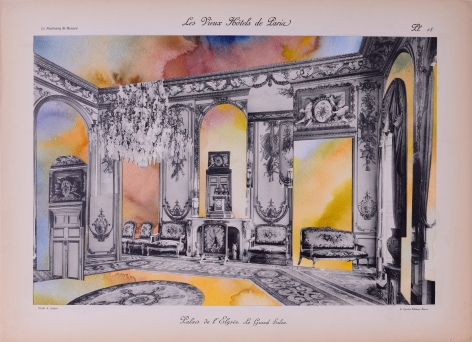 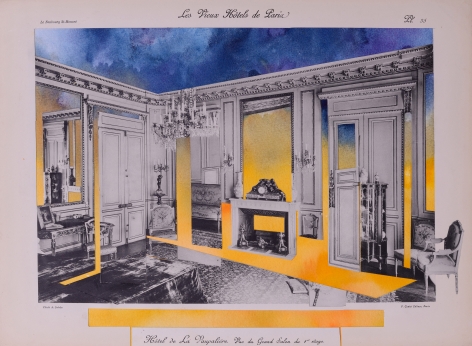 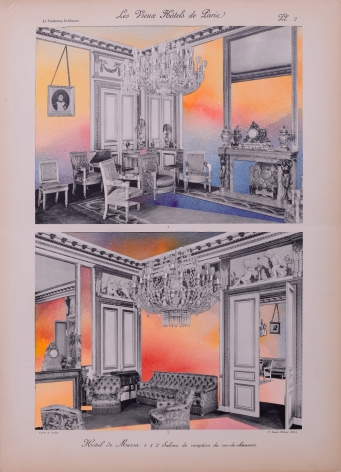 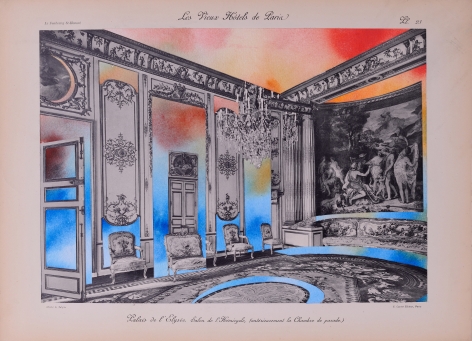 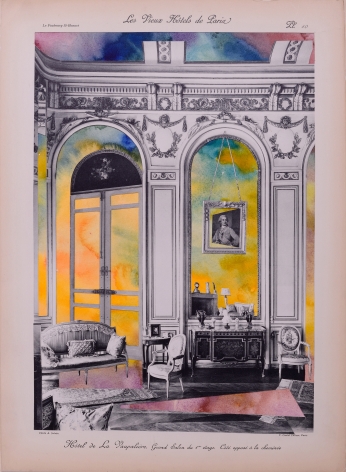 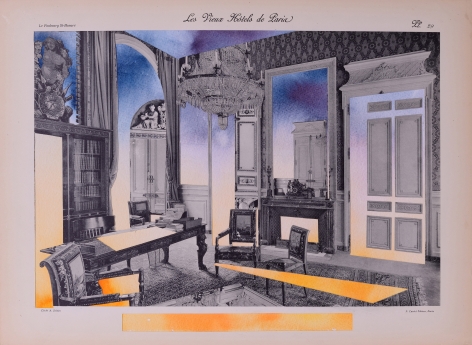 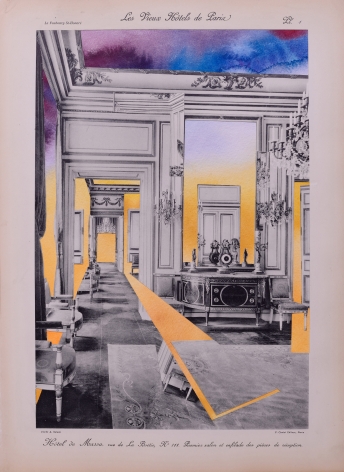 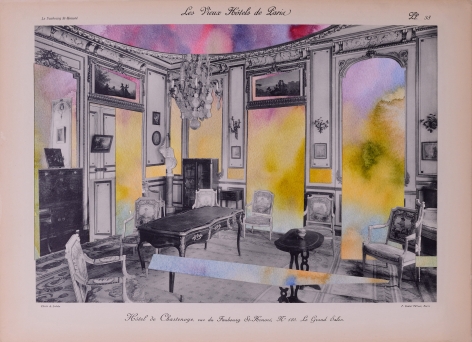 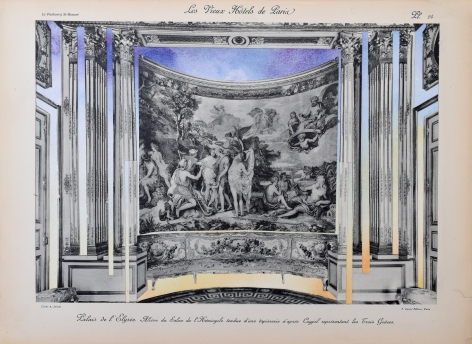 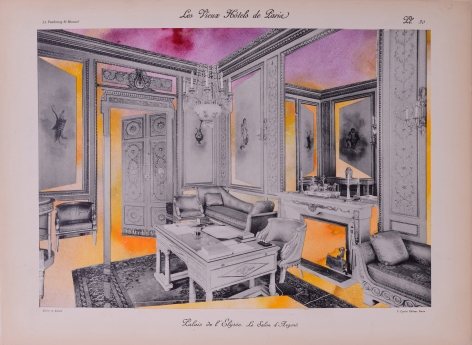 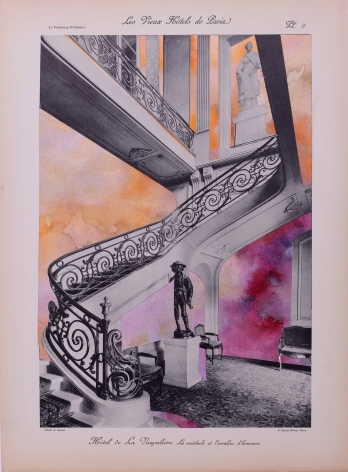 JONATHAN FERRARA GALLERY is proud to present The Salons, the premier exhibition of New Orleans-based artist Nurhan Gokturk. The exhibition unveils nineteen pieces in his newest body of work of collaged, found-lithography with watercolor. The exhibition will be on view in the centre gallery 31 May – 22 July with First Saturday Gallery Openings on 3 June and 1 July from 6-9pm.

Gokturk says of his practice . . .

The Salons are lithographic plates from 1919 that have been physically cut and overlayed onto paintings, ultimately collapsing the views of period rooms from the The Palais de L’Elysee and Hotels in Paris.

The Palais de L’Elysee has been the official residence of the President of France since 1848. Dating to the early 18th century, it contains the office of the President and the meeting place of the Council of Ministers. It is located near the Champs-Elysee. The name Élysée is derived from Elysian Fields. The Hotels are located in Le Faubourg St.-Honore throughout Paris and were constructed in the early 18th Century.

The cuts are binoculars into a separate realm where grey toned perspectival fields challenge the wide gamut of color space. These re-imagined places are periscopic viewports into the non-dimensional systems. The historical precision of these drawings confronts the automatic, expressive and inexact sensibility of the paintings.

Nurhan Gokturk is an artist and urban designer. Born in Istanbul, Turkey, Gokturk immigrated to New York City at the age of three. Raised in Queens and Brooklyn and educated in the public school system, he went on to receive a Bachelor of Architecture from Pratt Institute and a Master's Degree from Harvard Graduate School of Design. His projects have been featured at the Venice Biennale, The Metropolitan Museum of Art, Dox Centre for Contemporary Art (Prague), Buenos Aires International Biennial of Architecture, Aqua Art Fair (Miami), GLOBAL Design (London), the Contemporary Arts Center New Orleans 40th Anniversary Show, Governor’s Island Art Center (NYC), the New Institute in Rotterdam, the Onsite Gallery in Toronto and the Inaugural Bywater Biennial. His work has also been exhibited in Barcelona, Berlin, Boston, Detroit, London, Toronto, Vienna, as well as, across France, Germany and the United States. He has been featured in Metropolis Magazine, Gambit's Top 40 under 40, was Interviewed on NPR and awarded the Architizer A+ Award. Nurhan coordinated the first major Habitat for Humanity Buckminster Fuller Design Science Exhibition in Istanbul.