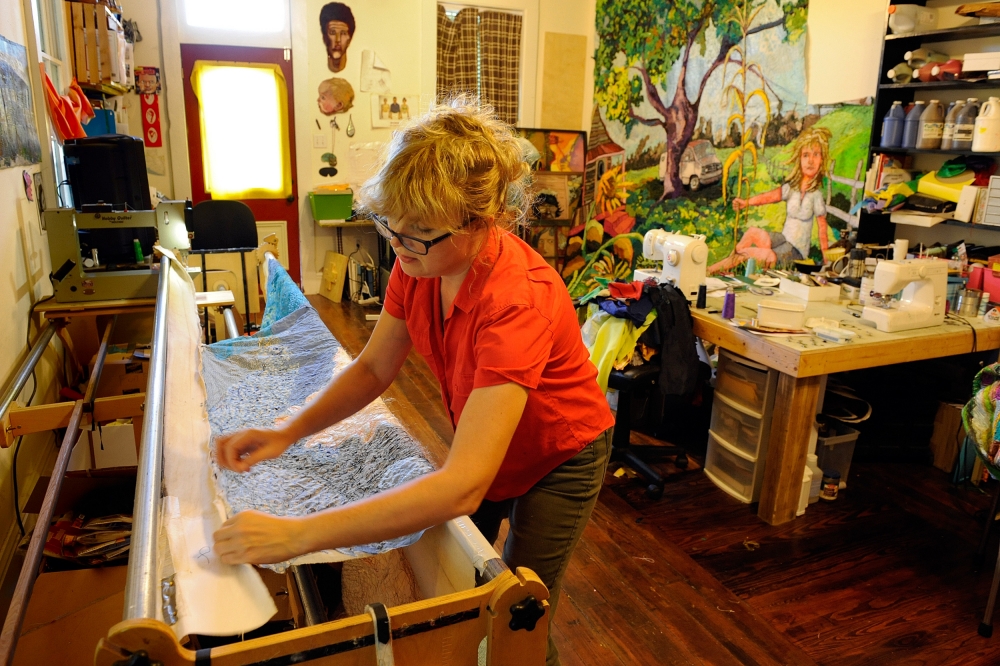 Q: Tell me about a time when you trusted your intuition over your logic.

A: I’m thinking about a particular body of work that I did. I started out working as a mixed media painter, and I didn’t even have a sewing machine, but I made my first piece hand sewing these weird bits of fabric that I had. I had already been painting on printed fabric, and then I started playing around with making imagery with the fabric itself.

I had this collection of black and white photographs that I had gotten from yard sales. It’s amazing, there are peoples’ whole lives in these boxes of photographs that you can find at yard sales. Anyway, I started working on a portrait of this guy who had this stark tank top tanline, and there was this really severe look on his face. I was working with latex — this natural liquid rubber — at the time and playing around with that as an adhesive.

I had these meshy fabrics, and I was drawing his whole figure on a naugahyde background. I’d finished his face, his torso and his arms. I was going to work on his pants next, but when I got to the workspace the next day, the material was peeling off the surface. I couldn’t help myself, I peeled the whole thing off like this fruit roll-up, and then I was holding this rubbery somewhat translucent figure in my hands.

At first I thought the piece was ruined, but then the image that I was holding in my hands was way cooler than my initial idea for the piece. That sent me down the path of making these strange cutout forms—starting with this portrait where I could juxtapose this guy’s strong, stern look through the medium of this vulnerable material. It changed the way I worked with fabric, and it was purely an accident.

Q: What do you think you most often smell like?

A: Peanut butter. The crook of your elbow let’s you know what you really smell like, especially if you’ve been out in the sun, and mine smells like peanut butter.

Q: What facial feature is the most interesting for you to look at in real life versus construct in a piece?

A: The eyes are always the thing that draw you in for real life.

For constructing, it’s the forehead. (Laughing.) I always start with the forehead. I don’t know what it is about them, but there are these subtle differences with the sides of peoples’ foreheads and the front of them. The forehead defines the face, the eyes structure, and it ties into the hair and the cheekbones. A face is intimidating, especially when you’re trying to capture a likeness.

I had done a series about Fats Domino after Katrina. It was some of the first work I did after rebuilding my house. I was thinking a lot about a sense of place, especially in regard to Fats, who even after he became famous, built a new home in this neighborhood when many other people might have left it. He became this symbol or this figure that could transcend time and space for me, so I put him in pieces that break the barriers of time or history.

Now I have this large-scale piece that’s going to be displayed at The Jazz and Heritage Foundation building, and there are so many faces in it. It’s this made-up space that’s a culmination of the research I’ve done about Fats, the R&B and the Rock n’Roll presence that was in New Orleans. The faces in the crowd go a little faster because they don’t have to be as specific, but the historical figures I’m putting in take a lot of time because they require so much detail.

I always bite off a little bit at a time when I’m working on a large piece, and there is such a sense of accomplishment when the forehead is done. That feels good.

Q: What’s one of your most favorite stories from your teenage years?

A: It’s a story of comedy and tragedy that involves my first car.

I grew up in Kentucky. We had a big family, and we were all pretty close. My grandpa was a mechanic, so whenever you got a car in our family usually at least three people had already had it. He could fix anything when it came to cars.

So my first car was a 1971 Ford LTD. It was a tank. This was my senior year in high school (I graduated in 1989), and having my own car was just so great. The sense of freedom driving down the road. Floating down the road in that huge boat of a car. I loved it.

Well, one day I got home from school. We had a bit of a compound going on with my grandparent’s house in the middle, my aunt Amanda (who had owned the LTD before me) lived on the other side, and other family members lived down the hill from there. And we lived on top of the hill. I went into my mom’s house, had a snack, did whatever, and an hour or two later I went to get my books out of my car.

I went out, opened the back door, got my books, closed the door, and went back toward the house. That action of opening and closing the doors quietly set the car in motion.

It just started rolling down the hill, and it was silent. I mean, I was already walking back into the house, and all I heard was the sound of gravel crunching, but no sound of a motor running. I turn around, and I see the front end of my car just slipping past the house. It was a jaw-dropping, time-closed-down kind of moment.

Next thing you know, my car is heading straight toward the road, and there’s another car coming down the road. My car is gaining speed. Thank goodness, the cars miss each other on the road, but then my car just wrecks itself. It runs straight into the hill on the other side of the road. It hit trunk first, so the car was just totaled. My grandpa could fix almost anything, but that he couldn’t fix.