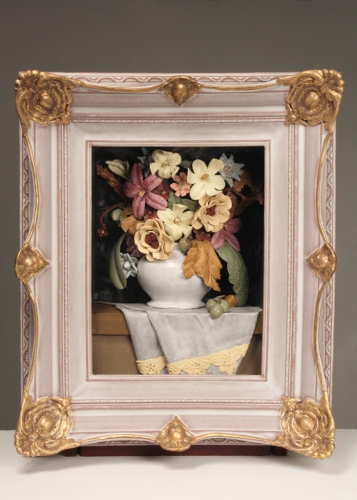 A peeled lemon, a cliff-face of pastries, a very dead cockerel — these aren’t subjects that immediately come to mind when you’re talking about ceramic sculpture.

But in his tour-de-force show, “Dirk Staschke: Executing Merit,” the Portland-based artist has finicky fun with them.

At the same time, Staschke — whose monumental ceramic cornucopia of fruit, vegetables and spilled viscera, “My Beautiful Nothing,” won Bellevue Arts Museum’s Biennial John & Joyce Price Award of Excellence five years ago — revels in disclosing the workaday process behind his finely calibrated artifice.

As he notes in his artist’s statement, “I make sculptures based on paintings in what is traditionally considered a craft medium. In this translation, the sculptural representation of still-life painting creates abstract forms. The results are beautifully made objects that simultaneously expose the crude structures of their creation.”

Five pieces in a series, titled “Translation,” dominate the gallery. Each is a 3-D still-life of fruit, flowers or (in a scene that might have come from the kitchen of “Downton Abbey”) small game and poultry awaiting dinner preparation.

“Translation #2,” the largest of them, features a partially plucked chicken, a yet-to-be-skinned rabbit, a side of pork with sausages issuing from it, a drooping but still fully feathered duck and various other edible creatures. Staschke’s almost photorealistic bas-relief is placed inside an elaborate gilt frame, made of wood because of its large size. (Other frames in the series are creamily ornate ceramic.)

Step behind the frame, and you’ll see a hollow-filled hive of clay — some of it white, some of it red — that hints at how the refined detail up front was created.

“Translation #4” depicts a lush floral arrangement placed on a finely embroidered cloth (all rendered in glazed clay, of course). It’s as lovely as it is kitschy. But again, when you step behind it, other elements come into play.

The structure holding up this ceramic extravaganza is made of reclaimed wood that, covered as it is in scribblings and children’s drawings, insists on its found-object origins. Tendrils like potato sprouts give some hint as to how Staschke formed this lavish bouquet — by forming each flower separately, it appears, and then pulling it by its stem into position.

Some of Staschke’s titles can be laugh-out-loud funny. “Birds in Hand” comes off as a wittily ludicrous understatement, given that it’s a massive brace of foul pouring down the gallery wall in a sort of waterfall of prospective meals.

“Handmade 3D Print” is the tartest piece in the show — and not just because of its realistically depicted peeled lemon. It also comments acerbically on a world where, as Staschke says, “the bars to production are lowered every day.”

While 3-D printing involves “tidy interaction with a disconnected tool,” he notes, his work demands “dirty hands in communion with the very material of the object at all points.”

From the rear, “Handmade 3D Print” resembles a wasps’ nest. Like all the pieces in the “Translation” series, it’s as organic in shape in back as it is elaborately mannered in front.

Similarly, “Confection” — that glossy “cliff-face” of stacked pastries — reveals its true character only when you look at it from an angle and see its mundane, unglazed clay-slab support structure in cutaway.

That dichotomy, with its emphasis on the double nature of the clay, is the whole beguiling point of “Dirk Staschke: Executing Merit.”