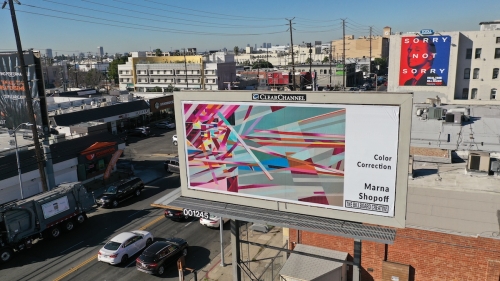 With the goal of shining light on underexposed artists and their practices through major, public exhibitions of artwork, The Billboard Creative (TBC) turns billboard advertising spaces into accessible art exhibitions open to all Angelenos. Works are selected through a curated, blind-submission process open to all, and shown alongside selected guest artists that have included Ed Ruscha, Paul McCarthy, Marilyn Minter, and Alex Prager.

This year’s show includes works in a broad range of media - photography, painting, assemblages, mixed-media, collage, and sculpture - and includes works from guest artists Marc Dennis and Kara Maria.
‍
“Our concept is to treat the city as an open-air gallery for both the benefit of the artists and Los Angeles,” says TBC Founder and Executive Director Adam Santelli. “LA drivers have passed our boards literally tens of millions of times since we started. That’s public art on a mass scale and an audience that is rare for an artist.”

“The Billboard Creative forefronts innovative artists and situates them in the slipstream of one the world’s most vibrant art centers,” said show curator Christopher Vroom, founder of arts nonprofit Artadia. “Promoting artistic practice has been a core passion of mine for over 20 years and to be able to work with great artists, giving them a vast canvas and a multi-million sized audience, has been amazingly gratifying.”
‍
The Billboard Creative started in 2012 as an experiment in public art with a single billboard. In April 2015, TBC placed 14 works by contemporary artists on billboards throughout Los Angeles. Through that effort, Santelli met photographer
Mona Kuhn, who signed on as curator and artistic director with a vision to help
the young organization expand and include a greater mix of both emerging and established artists. Its subsequent exhibition in December 2015 grew to over 30 works and included pieces from Ed Ruscha, Kim McCarty, and Jack Pierson. In the course of its six shows, TBC has hung more than 160 billboards from artists around the globe and has generated more than 35 million outdoor impressions.