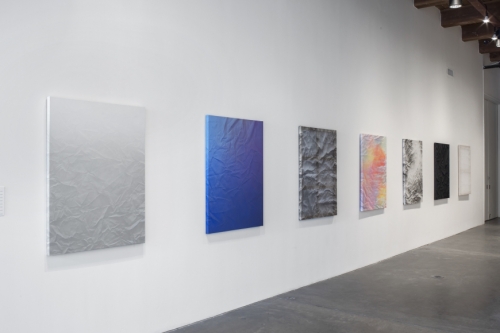 In coordination with the group exhibition, Hinge Pictures: Eight Women Artists Occupy the Third Dimension, the CAC proudly presents two solo artist presentations, Bonnie Maygarden: Principle of the Hinge and Aimée Farnet Siegel: Principle of Uncertainty that partner to stage a dialectic between the flat plane and three-dimensional space, between logic and chance, and between open and closed structures.  If Maygarden applies the principle of a hinge (to bend; to pivot; to move into space) as proposition and provocation, Siegel moves into the third dimension following form over logic.  Both artists explore the relationship between subjectivity and space, the occupation of and intervention into the shared environment. A doubling act, Principle of the Hinge and Principle of Uncertainty together invite the public into aesthetic doubt and determination.

Support for these exhibitions is provided by Anonymous, the Azby Fund, Sydney & Walda Besthoff, The Helis Foundation, the Visual Arts Exhibition Fund and  the Andy Warhol Foundation for the Visual Arts. Additional funding is provided by Étant donnés Contemporary Art, a program of the French American Cultural Exchange (FACE) Foundation. Étant donnés is developed in partnership with the Cultural Services of the French Embassy in the United States, with lead funding from the Florence Gould Foundation, the Helen Frankenthaler Foundation, Chanel USA, the ADAGP, the French Ministry of Culture, and Institut Français.

This exhibition is also supported in part by a Community Arts Grant made possible by the City of New Orleans and administered by the Arts Council New Orleans, as well as by a grant from the Louisiana Division of the Arts, Office of Cultural Development, Department of Culture, Recreation and Tourism, in cooperation with the Louisiana State Arts Council.