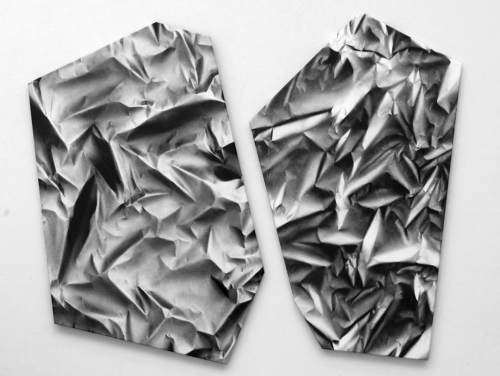 Bonnie Maygarden, a first year MFA student at Tulane, is a trickster- a breaker of rules. Her art intentionally leads the viewer astray through tromp l’oeil and illusion, sometimes obscuring flatness and other times confusing texture. Ironically however, through the evolution in her body of work, Maygarden’s goal to obfuscate the viewer’s perception has unwittingly led to an exploration of painting as a spatial entity.

Maygarden’s Gold Abstraction series depict in photorealistic detail gold slices of crumpled Mylar paper. The valleys and mountains within the paper prove rich subjects that allow the artist to describe both an observed object as well as the distorted reflection light produces. Maygarden produced this series while living in New York, the financial capital of the world. It is logical then, that her work represented the false financial materials that form the foundation within our economy. Her surprising statement is: “I use gold to convey empty value, which in my mind is a metaphor for art.”

Maygarden’s current work use paint, not to enhance form, but rather undermine or shape it. Using polygonal canvases, Maygarden has adventured deeply into the use of spray paint to create illusionistic texture. Similar to the painted mylar paper, the spray paint creates simulated valleys and folds based on color theory. Learning from the godfathers of the modernist movement such as Joseph Albers, Maygarden layers color to replicate light and shadow, thus suggesting a depth of field that is non-existent.

Maygarden’s experimental techniques push the spatiality of the paintings.  By depicting an abstract expanse, the painting becomes the space, rather than a traditional depiction of one. While this point of materiality is a great jumping off point, an artist can also run the risk of covering well-developed territory. One can’t help but point to Frank Stella, a master of spatial theory in painting. “But, after all, the aim of art is to create space – space that is not compromised by decoration or illustration, space within which the subjects of painting can live.”

What evolution in Maygarden’s work will push this dialogue forward? There is the impression that one of her work is producing the next. I look forward to seeing what happens when Maygarden explores implications raised by the body of work as a whole. Then, the trickster may become queen.