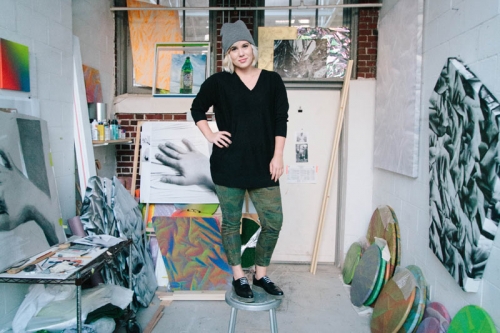 Painter Bonnie Maygarden wants viewers to question their perceptions and expectations. The New Orleans-born artist uses paint to create illusions, approaching the medium as “both light and mirror,” according to her artist statement.

Although Maygarden works mainly on canvas, her paintings take on a three-dimensional depth, leading viewers to wonder how she was able to create these works without the use of technology.

Maygarden, who trained at the New Orleans Center for Creative Arts (NOCCA), is currently living and working in the city. She credits NOCCA as a motivating environment that pushed her to become serious about painting. “Through working with the teachers there, I learned that becoming an artist was actually possible. It became tangible,” she says.

Maygarden, who looks at art “obsessively,” is inspired by a long, constantly changing list of artists. Currently, Gerhard Richter, Anish Kapoor, and Katherina Grosse are a few of the artists populating the top of her list, and Maygarden is always searching for new inspiration.

The artist received her bachelor’s degree in studio art from Pratt Institute in New York in 2010, and has taken part in several exhibitions since 2006, including shows in New York City, New Orleans, Baton Rouge, and France. Most recently, her works have been featured in her solo exhibition, “Virtuous Reality,” at The Front in New Orleans.

While Maygarden pursues a master of fine arts at Tulane University, she is putting together work for a solo show at Tulane’s Carroll Gallery in February, and for a show at Staple Goods in April.

She is looking forward to incorporating sculpture and installation in these upcoming shows. “I’m interested in pushing the boundaries of paintings not only as images, but as objects,” Maygarden says. “I love to experiment, and it is important to me to keep things challenging and fresh, so I’m always looking for new techniques and materials to play with.”

Maygarden’s early works contrast greatly with her recent portfolio. Some of her older works include a series of Coke cans drawn with charcoal on toned paper. Another series showcases a set of glittery, gold objects, including a skull, banana, and nail. This series takes items that are commonly overlooked or never considered visually appealing, and makes them beautiful.

“My work is an exploration of materials and forms that attempt to push the boundaries of painting and perception,” Maygarden says. “Ultimately, my work serves as a perceptual catalyst that alerts viewers to the experience and expectations of our visual world.”