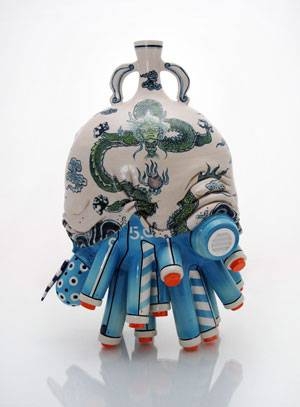 Walk into Gallery Jones—soon, because the exhibition closes this weekend—and prepare to be dazzled. On view in this two-person show are a dozen ceramic sculptures, by Brendan Tang of Kamloops and Dirk Staschke of Vancouver. And while preparing yourself for dazzlement, expect to discard any preconceived notions you might have about the nature of ceramics.

Over the past decade, the humble lump of clay has become the site of immense energy, facility, and provocation. Staschke, who has an MFA from Alfred University in New York, and Tang, who holds an MFA from Southern Illinois University, complement each other in their ability to compress beauty, grotesquerie, humour, and probing intelligence into their quite distinct works.

In a recent statement, Tang writes, “My artistic practice embodies the influences, tensions and contradictions that define the postmodern world.” To this end, his earthenware and mixed-media sculptures enfold Chinese porcelain and French ormolu traditions into contemporary Japanese manga forms. The result is a series of compelling mutations in which blue-and-white Ming-style vases are at first supported and then undermined by shiny robotic arms, legs, bolts, pods, tubes, and tentacles.

The Ming-vase elements take on a curiously organic character, and in some instances appear to be rumpled, deflated, or detached, like flayed skin or severed limbs. This sounds horrible, but really it’s sci-fi/po-mo wonderful. It also speaks eloquently of high and low, tradition and innovation, cultural hybridity, and the impact of technology on the vulnerable human body.

Earlier in his career, Staschke also combined Asian and European ceramic and decorative forms, but his most recent sculptures appear to derive their references from 17th-century European still-life paintings. In works such as Swan Song, this means the juxtaposing of sumptuous abundance with intimations of mortality, to which Staschke then adds an element of the grotesque. His sculptures draw you into their sexy profusion of grapes, melons, apples, and flowers; surprise you with the appearance of more assertive forms such as cabbage leaves and upright cucumbers; and then knock you out with a lobster claw, a pimply fleshed raw chicken, and looping ribbons of viscera.

Staschke’s facility is extraordinary, in the modelling and finish of his art (natural colours are muted by a thick, milky glaze) and in the slightly-smaller-than-lifesize realism. But what gives this work its startling relevance is its ability to call up any number of social and environmental issues, from overconsumption to climate change. The small fish that leaps out of Still Life #2—mouth open, eyes bulging—seems to be making a last, hopeless effort to survive. God save us all.