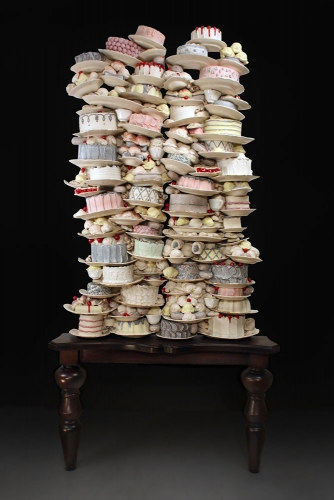 After winning the John and Joyce Price Award of Excellence at the Bellevue Arts Museum (BAM) Biennial 2010: Clay Throwdown!, ceramics sculptor Dirk Staschke was invited to mount a solo exhibition as part of his prize.

Less than two years later, Dirk Staschke: Falling Feels a Lot Like Flying, debuted at the museum between 1 March and 27 May 2012. Staschke's nine pieces reverberate with the artist's ruminations on how eating passes from desire to cultural excess. Curated by Stefano Catalani, Director of Curatorial Affairs/ Artistic Director, the exhibition's title plays with the idea that sensations may appear similar while representing different aspects of the human condition.

Staschke's work falls into two distinct styles: (1) Tableaux featuring glossy, photo-real banquets of desserts embellished with gold serving trays and (2) matte pastel combinations of fruits and vegetables often spilling out like cornucopias. The initial group of works packs the greatest punch because it is hard to resist the sensuous pillows of whipped cream and the realistic sugary icing that beckon visitors closer. The presentation of this faux food all but drowns out the softer sculptures located at the farther end of the gallery.

Confectional Façade is a confectionary tower piled high with assorted bas-relief cakes, pies, croissants, chocolate rolls and eclairs that is centrally located between the two galleries dedicated to the exhibition. Staschke's meticulous technique is a marvel of sweet desserts stacked like a wall nine-feet high and balanced precariously like a house of cards. His playful use of words, as well as images, poses the thought: Confectional sounds a lot like confessional. What sins are waiting to be discovered?