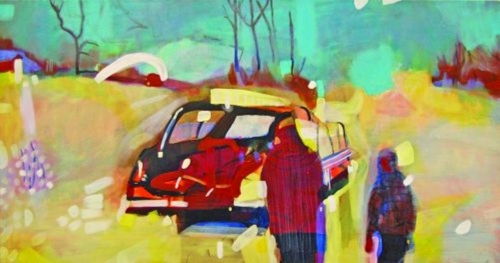 Snow sounds good right about now, doesn't it? Tucsonans sweltering in 108 degree temps will be interested to learn that in Tucson, right now, Jenny Day is exhibiting expressionistic paintings of Alaskan snow. Snow on fields. Snow in forests. Snow on mountains. And the freezing people in her pictures are so bundled up in hoods and snowsuits that they look like deep-sea divers.

But these chilly scenes of winter are hardly the only reason to get over to the Porter Hall Gallery at the Tucson Botanical Gardens. Day's These Trace Remains is an exhilarating solo show of energetic paintings by an ambitious young painter.

A grad student at the UA School of Art, Day is showing 14 luxuriantly painted acrylics on canvas that are only partly about landscape. Her works do venerate Alaska's natural beauty, but they also take a hard look at the degradation of its wild places.

In "Precision threat gesture: abandoned," a monstrous industrial tower left over from some wildcat extraction enterprise juts up out of the snow. A rough and ugly fence blots out most of the views of the land. A pristine sky is still visible, but only just, behind a kind of split satellite dish that flaps like a pair of giant snow wings against the fluffy white clouds.

Other paintings conjure up the underbelly of a mining trestle ("Semi-diurnal range") and re-create an auto junkyard in the woods, where a pile of cars is slowly disintegrating ("Wild to be wreckage forever").

Day studied painting and printmaking as an undergrad at the University of Alaska Fairbanks. Her artworks, she writes, are a "re-consideration of memory, the aftermath of environmental destruction and the value of communities at the margins of the wild." Human traces remain in nearly every part of Day's painted Alaska, a raw frontier where industrial detritus mixes with natural beauty.

"Deadfall windbreak" is a long view of the wilderness. A damp white sky hangs over pale blue-gray mountains lying low on the horizon. Up front clumps of snow occupy a mudscape colored every shade of brown, from burnt umber to burnt sienna. Through this austere terrain, deep-red human-made fence cuts a sharp diagonal, colonizing nature's spaces.

In "Recombinant rearview," the family station wagon literally frames the wilderness-and a memory. It replicates the view an untethered Alaska kid would have in the station wagon's wayback, watching the miles of manmade road that cut through the pristine outback. One can imagine the incipient young painter taking it all in on long rides, watching as the car window shaped and controlled her vision of the landscape.

None of these glossy works are painted realistically. Broad shapes, bold colors and strong lines take the place of small details. Day layers her colors on brushily, often leaving daubs and strokes that are nearly impressionistic. And her lively compositions are always inventive: sweeping diagonals and looming structures, pictured from an ant's eye view, make viewers feel small just as they would in the broad sweep of Alaska.

Occasionally she celebrates the unadulterated land. "Luxuriant gravity" is a cheerful near-abstraction of an untouched forest. Day reduces the woods down to its simplest elements—the upright thrust of the tree trunks, the dappled spaces in between, the curving branches and the meandering roots below. Painting these organic shapes in all the greens that exist, she creates an almost Platonic idea of the woods.

The human figures that inhabit some of her painted spaces suggest a childhood spent on the edges of the back country. In several paintings a parent and child appear in the snow, swathed head to toe in puffy hoods and coats. They wear clothes colored red, the better to be found if they become lost in the white wilderness.

"Isolative" places the two figures in deep snow. The child is nearly hidden by a drift; only the round halo of her hood is to be seen. The brilliance of sun on snow is captured in small daubs of pastel peach, pink and yellow. A house sits on a ridgeline just beyond them, and they're framed by a window in the foreground. But even with these domestic accommodations the two appear isolated and alone, snowbound in nature.

"What we believed about snow" seems like another memory painting. The same parent-and-child duo is once again out in the snow, this time near their car. The large, quiet painting conveys the stillness when the snow is deep and the sound is muffled, save for the crunching of footsteps. A winter-blue sky is above them, and all around them the snow gleams a lemon yellow. They have their backs to us, facing the horizon, but their destination is unclear: they're either returning to civilization or about to set out into the wilds.