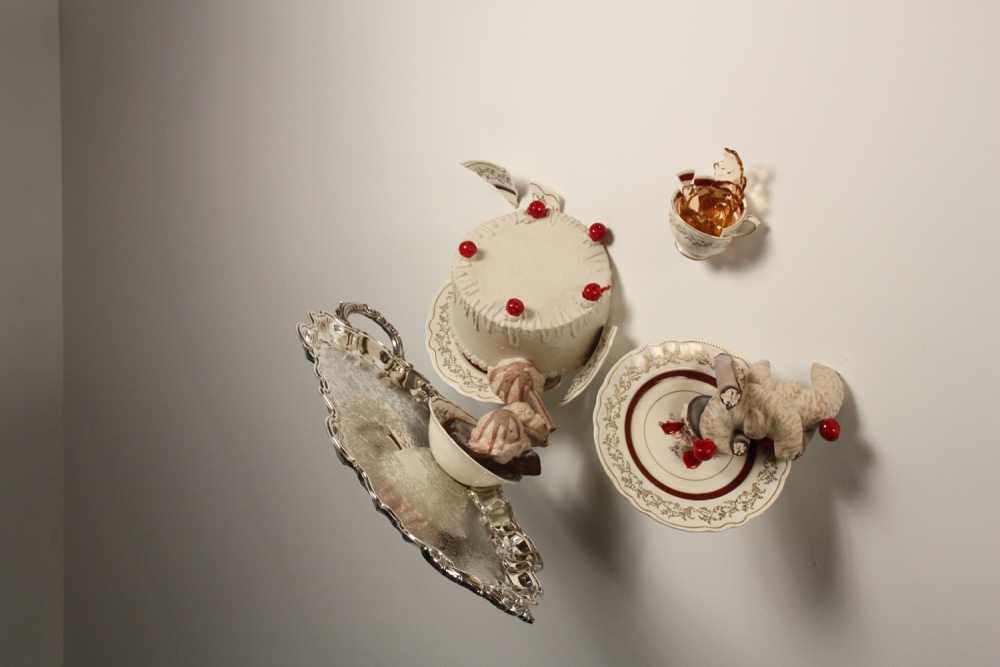 In a collection of 18 ceramic and mixed media sculptures, Dirk Staschke explores the tradition of still life painting that emerged in Europe, specifically in Dutch “Vanitas” paintings, in the 17th Century. Staschke explores themes such as the ephemeral nature of pleasure and the inevitability of death. Historically, these ideas were situated in the context of Christianity as an exhortation to piety; in Staschke’s hands they are a bittersweet reminder of the plenitude, beauty and decay of the natural world.

Works like Soliloquy #2 (2016) explore the illusionist character of still life painting and function as trompe l’oeil of framed still life works. Meticulously crafted ceramic objects—table cloth, backdrop, grapes, conch shell, a small loaf of bread—recede into the space behind a gilded frame, also ceramic. Even as he tricks the eye, Staschke exposes his means of construction, leaving the backing unfinished. A stack of raw wood planks supports the sculpture from behind, and the unglazed terra cotta structure reveals the ribs that hold the piece together.

Staschke also creates illusions of his own. Fragments of objects protrude through the back of the ceramic structure as if continuous with the arrangement within the frame. This is dimensionally impossible, however, and these are not the same objects as seen from the front of the piece.

Other works, like My Beautiful Nothing (2010) and Consuming Allegory (2012) demonstrate the abundance of the earth, but mixed in with the tumescent melons and gourds are entrails.

Four works, A Confection (2014), Wishing Well, Knowing Otherwise(2011), Let Them Eat Cake (2013), Passing Time (2011-2016), depict an over-saturation of pleasure in the form of cake or pastries in various configurations. They are somewhat reminiscent of Wayne Thiebaud’s luscious paintings of bakery shelves stacked with goodies.

Cake is the surprise of the grouping. It is a contemporary tableau that appears to tumble off the wall, as if a desert tray at a luncheon has been dropped by the distracted hostess. Frozen in a moment of upset, the cake flies in one direction, coffee lurches from a cup and ice cream and brownie somersault off the silver tray.