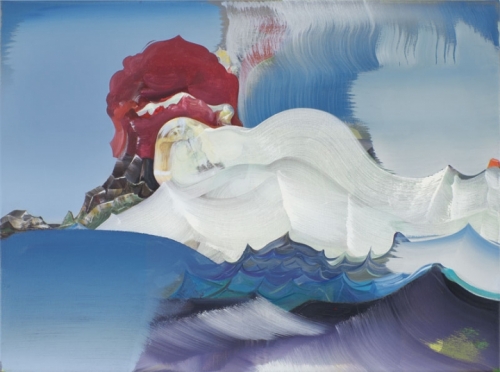 Ever since I saw Elliot Green’s paintings in the 2015 Invitational Exhibition of Visual Arts hosted by the American Academy of Arts and Letters (March 12 – April 12, 2015), I have wanted to see a solo show by this artist. Beyond my curiosity, I wondered if — as the handful of paintings I saw during the past two years suggested — Green had attained a level of completeness that surpasses everything else he has done, which is considerable. This was one of the questions I had when I was on my way to his exhibition Human Nature at Pierogi (February 18 – March 26, 2017). Could he astonish me? Or was that an unreasonable expectation? I am happy to report that I was astonished in several ways, which I hope to enumerate in this review.

First off, Green is not a magician and there are no slights-of-hand in these paintings. He places all the evidence in front of us, even that which he covers over. He uses different tools to apply layers of creamy paint to the canvas, as well as scrape it off. I am guessing soft bristle brushes and paint scrapers but I would not be surprised if he used other tools, including some of his own devising. Depending on what he uses, the marks vary — from wide, grooved brushstrokes undulating across the surface, like a banner or Chinese dragon, to staggered slabs of paint reminiscent of geodes and rocky inclines and outcroppings. He can also smooth the paint down, like a plasterer.

The paintings range in size from 18 by 24 inches to 77 by 137 inches. Their common subject is an uninhabited mountainous landscape in which pristine bodies of water nestle and smaller, self-contained landscapes and unnamable activities assert themselves. The climate is decidedly northern and mostly cloudless. The paintings stir up a host of associations, even as we recognize that we have not seen these places before: they are visions of an active world transformed into palpable skins of paint, in which a variety of greens and blues dominate, with violets, grays, yellows, and reds lodged throughout their panoramic views. What distinguishes these views from other landscapes is that Green’s paintings are essentially abstract; they approach the pictorial but never tilt over into that domain of quick legibility. We might start by finding equivalents but soon realize that is not what they are about.

Green has channeled the landscape paintings of the early Northern Song dynasty — when painters took to the mountains to escape the turmoil of a political order uneasily shifting from aristocracy to bureaucracy — along with the fantastical landscapes of the Sienese painter Ambrogio Lorenzetti. And if he has traveled across a thousand years to two very different cultures — which I am convinced he has — his paintings do not strike me as the least bit nostalgic: he is not romanticizing the past, but has found a way to be in tune with a rapidly disappearing realm, that of nature not despoiled by humankind. By simultaneously celebrating a wondrous landscape and the evocativeness of paint, Green folds an aching poignancy into his work, that as if acknowledging that mankind seems determined to go in the other direction because they smell profit rather than see beauty.

In her catalogue essay, the poet and editor Jana Prikryl writes:

Elliot Green’s paintings appear to be in constant motion, the way animals, plants, and ultimately rocks and mountains are in continuous motion, even when our human vision fails to apprehend it.

This sense of continual motion connects Green to Vincent van Gogh, which, if you think about, is pretty amazing, especially since he does not replicate the Dutchman’s well-known repertoire of abstract marks. Another important difference is that van Gogh was methodical, while Green — a thoroughly American painter — is improvisational. He does not make a painting so much as find it in the process of layering (and removing) manifold forms, furls, and striations of luscious color. We do not see the sun in Green’s skies, but light radiates throughout.

Green’s process is geological, the incremental layering of gooey, pigmented sediment, each deposit delivered by a particular method. And yet, as much as we read these paintings as visionary landscapes, we never lose sight of the fact that we are looking at varied coats and swirls of paint, a record of gestures and actions. The paint’s viscosity runs the gamut from mist to water to lava to stone. At times, it is impossible to tell whether we are looking at something that is solid or liquid: maybe it is both.

The twisting and folding layers of paint evoke a ceaseless magmatic churning, such as the continuously erupting Kilauea in Hawaii Volcanoes National Park. In fact, the island of Hawaii is probably the closest real-life equivalent to Green’s imagery, in that it encompasses four out of five major climate zones. Green seems to have compressed these major zones and numerous sub-zones into a single painting, such as “Fire Drip” (2016), with its sharp red peaks in the middle ground rising from behind rounded and quirkily shaped green forms. In “South of Nouth” (2017), the colors and shapes seem to incarnate a relative of the Aurora Borealis rising from behind a mountain.

What Green does is make paintings that seize the imagination. We think we are looking at a landscape, but we cannot delineate everything in it and in the end we do not care. Instead of being disappointed, this inability becomes a deep, abiding pleasure. From ravishing entanglements of foreground, middle ground, and background to discrete forms interrupting a vista with a contrasting amalgam of geology and weather, it is obvious that Green knows how to remake the conventions associated with landscape. We do not look at these paintings: we succumb to them. Their real allure is that Green never tries to fool us: he approaches resemblance but never forgets that he is using paint. Fifty years ago, Frank Stella said he wanted to keep the paint as good as it is in the can. Green’s paintings offer a complete and thorough retort: he wants to keep the paint as good as it is in his mind.