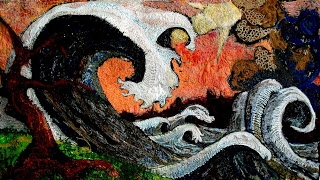 You might call this a high concept show that celebrates the swampy lowlands of South Louisiana. “The Call of the Alluvial Empire” was the title of a pamphlet put out in 1919 to attract labor to the region. In fact, waves of immigrants had already arrived only to deal with the inundating waves of hurricanes as well as the meandering Mississippi and other rivers that until relatively recently had a bad habit of suddenly changing course. Gina Phillips' obsessively stitched fabric paintings make up an impressionistic  slice of life in a region where the tides never rest. "Salvage Operation" depicts a cutaway view of the Mississippi with docks and bridges above as a deep-sea diver below pokes through a watery graveyard of junk and sunken ships, long lost houses and even the remains of formerly buried British casualties in the War of 1812 who were swept under when the river changed course. Other scenes such as "Rogue Wave," top, and "The Arrow of Time is a Lie," above left (detail), are more bucolic, but all comprise a series of narrative paintings skillfully cobbled from colored thread in a spate of flamboyant embroidery.