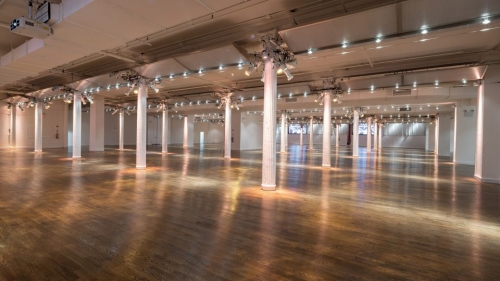 There’s nothing as sweet as a comeback, but last year it was uncertain if Volta, an art fair that has historically featured smaller and emerging galleries, would ever recover from its sudden cancelation just days before opening for New York’s Armory Week.

“You can focus on the negative, or you can look toward the positive,” Kamiar Maleki, the art fair’s new director, told ARTnews. “We are trying to recapture our momentum.”

In October, Ramsay Fairs acquired Volta for an undisclosed sum, adding it to a portfolio that includes brands like Affordable Art Fair and Pulse Contemporary, both of which tend not to feature blue-chip works that can be seen at fairs like Art Basel and Frieze. The purchase came at the end of a fraught year for Volta, which last February canceled its 12th edition after construction issues forced the Armory Show to relocate a portion of its programming to the fair’s venue. (Both fairs were previously run by Merchandise Mart Properties.) Outraged by the displacement, exhibitors worked with collector Peter Hort and dealers Quang Bao and David Zwirner to mount an alternative exhibition, Plan B, that took place at two of the latter gallerist’s Chelsea spaces.

“It truly is an exhilarating time,” said Maleki, a collector known for directing Contemporary Istanbul from 2016 to 2018. “We have focused the exhibitor list on a strong and diverse 50-plus galleries and have loosened up the solo-project mandate to offer participants greater liberty to stage their presentations as they would do so at their home galleries.”

Volta 2020 will take place at Metropolitan West, which is located only a few blocks south of the piers where the Armory Show takes place. According to Maleki, the exhibition will look toward the fair’s “extended family” and see the return of a handful of galleries after several years of absence. Among those coming back to the fair are Jonathan Ferrara Gallery (New Orleans), Lyle O. Reitzel Gallery (Santo Domingo), Léna & Roselli Gallery (Budapest), and Galerie Wenger (Zurich).

Many of the artists showcased at this year’s edition engage with political and environmental topics. Yaw Owusu will examine socioeconomic concerns in Ghana with Gallery 1957 (Accra); Ansen Antilla will debut a new series called “Wasteland” underscoring the artist’s ecological concerns in Turkey with the gallery x-ist (Istanbul); and the gallery Roya Khadjavi Projects (New York) will present a range of works exploring Iran’s contemporary art scene and diaspora by artists Aida Izadpanah, Shirin Hosseinvand, and the Safarani Sisters.

“While never participating before, we have always found Volta to be the perfect place for artistic discovery and collecting,” said Victoria Cooke, director of Gallery 1957. “With Kamiar now at the helm and the new location, we’re expecting really great things.”

Compared to last year, the size of Volta has decreased by nearly 30 percent, and the majority of exhibitors from 2019’s canceled edition will not be returning. “You are only as good as your last fair,” says Maleki, who’s looking to woo galleries back after the 2019 fiasco. “I think it’s better to have quality over quantity.”

Still, there are some holdouts, including Jonathan Ferrara. “The gallery is excited to return to Volta, with its unique and characteristic, aesthetic position in the marketplace,” Ferrara told ARTnews, adding that the fair’s emphasis on solo exhibitions and new management is a recipe for success.

Maleki says he is excited to see how people react to Volta 2020, which runs March 4–8.

“I wouldn’t be doing this job if I weren’t nervous,” he said, noting that he has consulted with people like Hort and the fair’s previous director, Amanda Coulson, on making this year’s edition a success. Ultimately, Maleki is focused on restoring an experience of excitement and discovery to Volta, which critics say has been absent from recent editions.

And if another unforeseen catastrophe comes his way? Maleki says he’s not worried. “There’s always a plan B, but we believe that Volta will succeed.