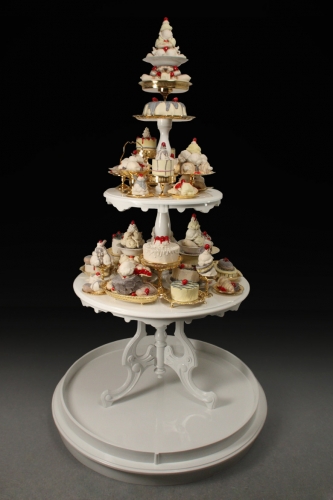 Look closely at Dirk Staschke’s work. It just might fool you.

The pieces are expertly shaped, colorful and almost ask visitors to reach out and touch. But don’t, even though they are prime examples of transgressive art — a name given to art forms that violate perceived boundaries.

The work isn’t shocking, but certainly is thought-provoking since he finds inspiration in the lavish unsettling sculptures done by Flemish and Dutch Vanitas still-life paintings from the 16th and 17th centuries. In fact, there’s even a nod to the still-life tradition of trompe l’oeil where objects are painted (in this case, sculpted) to look exactly like a real object. And there’s a distinct reference to vanitas paintings. “Vanitas” is Latin for emptiness and these works reflect the idea that earthly goods and pursuits are worthless.

The works are a reminder of the transience of life. For example, one of Staschke’s pieces is a three-dimensionally framed peeled lemon showing that, like life, is fun to look at but bitter when tasted.

Staschke’s pieces have a definite point of view — they represent commentary on society’s cravings, overconsumption and excess. There are a lot of piles of pastries, fruits, fowl and meats involved. “It is this modulation between the real and illusionistic that most interests me and ultimately makes my work about perception,” the artist said in a statement.

Staschke goes further in asking visitors to consider what part medium plays in the value placed on art and whether knowing the creative process adds to or diminishes its value. He earned his bachelor of fine arts degree from the University of Montevallo in Alabama and his master of fine arts degree from New York’s Alfred University. His work has been shown internationally and is included in the permanent collections of the Renwick Gallery of the Smithsonian Museum in Washington, D.C., and the Museum of Fine Arts in Houston.

Executive director Beth Ann Gernstein selected Staschke’s work for the inaugural show in AMOCA’s new 3,200-square-foot exhibition gallery, which in itself is an impressive space. The works and the space complement each other.