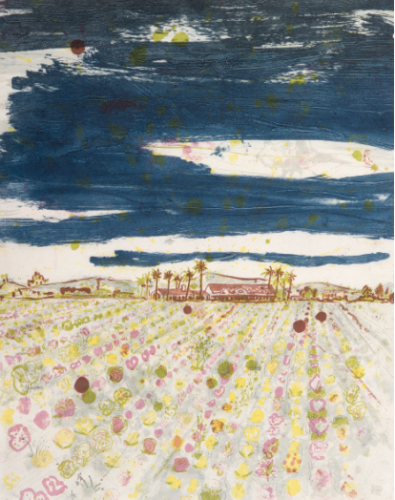 Travel and place have long factored into the narrative paintings, prints, and sculptures of St. Louis-born, New York-based artist Lisa Sanditz. In recent years, she has turned her attention in large part to the globalized landscape. From urban Chinese factories and American Midwestern crop circles to her parents’ suburban community in St. Louis and her own backyard in upstate New York, the artist explores the astonishing and often compromised relationship between the built environment and the natural world.

During a residency at Island Press in spring 2014, Sanditz made two works that consider the impact of commercial agricultural practices on native habitats. The major etching Space Invader depicts the body of an undulating python against which Sanditz has layered outlines of tomatoes tagged by acid-hued spray paint, reproductions of supermarket produce stickers, and decorative embossments created from carved Mylar. Additional spaces are left blank for the viewer, should he or she wish, to apply a set of appliqués scanned from a photograph of a Fendi handbag. Sanditz was interested in the recent invasion of Burmese pythons in the south Florida Everglades, where they threaten to devastate the region’s ecosystem. Her depiction of the python—whose painterly rendering in sugarlift echoes the snake’s wild and unpredictable behavior—alongside images of commercial food production and fashion commodities traces a melancholic path from the world of nature to that of unbridled consumption on a swift and massive scale.

Following Sanditz’s 2013 painting by the same name, Salad Kings is a nine-color lithograph with collagraphed elements. The buildings of a modest farm estate form a horizon line sandwiched between a field of vegetables and an expanse of midnightblue sky. The print is rendered rather sketchily; Sanditz leaves open fields of white to emphasize the space and scale of Above: The Salad Kings, 22” x 16 ½”, photolitho with collagraph, 2014. commercial farming. The artist was inspired by her visits to farms in California, where once-seasonal produce is now regularly grown year-round. The addition of the intaglio process of collagraph enables Sanditz to add visual and formal texture to both ground and sky while also emphasizing her own markmaking. Through a variety of printmaking techniques, both works allow Sanditz to question how much we truly gain when the natural cycles of life are indelibly upset.