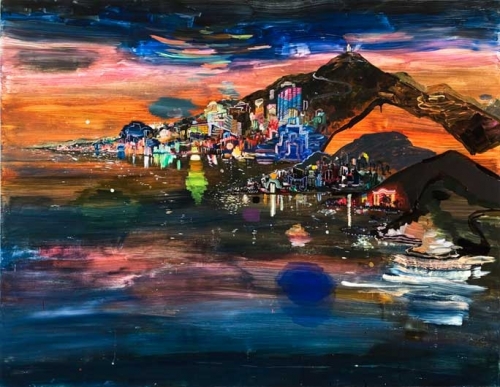 In Lisa Sanditz’ ebullient, skewed landscapes, flatly painted in an array of punchy colours, the USA is a crazy quilt of oddities and conflicting fantasies. At their best, the paintings suggest a dizzyingly iridescent, ad hoc culture in which the artificial mixes with the natural like oil with water. Her show ‘Organized Living’ referred to real places, including Hiddenbrooke, a California residential development endorsed by the wildly successful American entrepreneur Thomas Kinkade – a self-styled ‘painter of light’ who purveys intensely saccharine ‘olde worlde’ scenes to a mass audience – and a very different seaside community that embraces recycling and alternative energy. Some of Sanditz’ works, especially those that invoke Kinkade’s touchy-feely empire of the quaint, hint at how ideas about what constitutes art help to shape the physical environment, through both corporate and private intervention, and how such ideas can be pathetically impotent, relegated to strip-mall galleries, the walls of bland living-rooms and decorations on the sides of RVs.

A plaintive, folkishly threadbare scene directly inspired by Kinkade’s foray into property development (his ‘brand’ has also been applied to products ranging from calendars to night-lights to coffee mugs), Sanditz’ The Village of Hiddenbrooke II (all works 2005) depicts six boxy houses adrift in an arid, treeless terrain. Satellite dishes rather than chimneys poke from the roofs; through wide picture windows one can get a glimpse of large paintings of quainter, more elaborate homes in lush settings. Sanditz’ sudden shifts in style, palette and intensity of brushwork only heighten the sense that the wall décor depicted inside the dull homes is in direct competition with the ‘reality’ of the world supporting it. When the community of Hiddenbrooke was created, the on-line magazine Salon reported that each surprisingly charmless model home contained Kinkade prints. The author wrote: ‘This is some consolation: even if the village homes don’t actually have views or thatched roofs or mossy masonry or gardens bursting with flowers or sparkling waterfalls descending down purple cliffs, you can look at those things on your walls.’ Even the names Kinkade assigns to his various series, such as ‘Peaceful Cottages’, play on collective dreams of living in tranquil, picturesque surroundings, and Sanditz’ eye-popping scenes of tract houses inspired by fantasies of living in make-believe landscapes extend the telescoping absurdity of Kinkade’s cheerfully escapist but lucrative editioning strategy.

The artists Vitaly Komar and Alexander Melamid have tackled the issue of mass taste in capitalist societies head-on, with projects such as ‘America’s Most Wanted Paintings’ and ‘America’s Least Wanted Paintings’, in which Americans were asked to answer a series of questions about their aesthetic preferences. The pair’s investigations involving professional market research polls have been informed by their familiarity with Socialist Realist calls for narrative accessibility and widespread appeal. At the same time they both conceal a yearning for the days of Modernist artistic Utopianism and its goal of a universal artistic language, and call attention to the absurdity of the very concept of popular taste.

Sanditz’ work can have a certain similar deadpan quality, as well as a degree of wide-eyed bafflement with what passes for ‘perfect’ and ‘beautiful’ in the minds of most people. But her humour is more of the ‘wow, how weird’ variety. ‘Cave Painting’ Meramec Caverns II is based on a subterranean tourist attraction in Missouri that has been bizarrely denatured, with linoleum, bright lighting and rows of chairs installed in its underground ‘ballroom’; in Sanditz’ painting the chairs, arrayed alongside a rustic house, are nestled in the cave under rainbow-coloured stalactites. Vaguely reminiscent of dreamlike Yves Tanguy landscapes, Earthships and Their Neighbours, inspired by a co-operative West Coast community dedicated to alternative energy sources, depicts a beach with decalcomania-inspired dunes and hills. A trailer home, an out-house with a bovine skull hanging over its door, and a hand-shaped sign pointing nowhere all suggest a transient presence. In Landscape with Sunset, Exit 19 RVs embellished with spray-can painted scenes snake across a desert landscape under a sunset that mimics the decorations on their sides. As in Kinkade’s paintings, people are rarely visible. They might spoil that ‘perfect’ moment.

Although Sanditz invokes Kinkade, who touts himself as ‘America’s most collected living artist’, her faux naïf style glancingly echoes work by ‘legitimate’ artists, ranging from Raoul Dufy to Ed Ruscha, whose work is safely ensconced in museums. In fact, she takes a surprisingly traditional interest in art history: subjects she has addressed in the past have included images of outdoor recreation inspired by Bruegel’s ‘Seasons’ and ‘Months’ series. If Sanditz can draw on these various influences more self-consciously, her approach to her intriguing subject matter may become more adventurous.