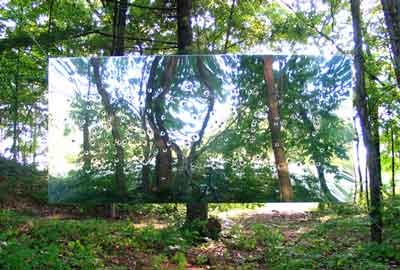 It sounds like a stunt: position a polished steel rectangle outdoors, move back 30 or 40 feet, shoot bullets at it. Presto! Instant art. Something reminiscent of Yves Klein, perhaps, Chris Burden or Joseph Beuys, or some latter-day conceptualist or performance artist.

But the results of this unorthodox, theatrical process relate to painting, not performance, and are spectacular-looking, not just novel-sounding...

The polished stainless steel surfaces are mirror-like and in a gallery environment are full of dazzle, gleaming with light in contrast to the bullet holes' black. In between those two tonal extremes, the force of the bullets' impact is recorded in a curvature of the metal, a beveling, puckering, or even more severe distortion that records one's reflection as in fun-house mirror. As we focus in on the bullet holes we are sensitized to surface variations and experience a kind of ravishing sensuousness, one that recalls the gleaming chrome of auto shows, or pools of mercury. .

With her bullet sprays, Evangeline takes us through variations on asystematic patterns or simple, poetic configurations that comprise loose-knit, lyrical compositions. (One suspects that her process of selection, weeding out many not-so-good results, might parallel those of other artists whose methods permit less than rigid control.) The physical nature of the holes, with their naturally occurring beveled edges--without which they would be mere black dots--anchors them in the structure of the painting with the equivalent of a painterly tactility. Variations on this ingenious dynamic might be sufficient, enough for an impressive exhibition. But in different works Evangeline uses what apparently are different calibers of bullet, uses a variety of weaponry from hand pistols to shotguns, so that works with larger holes create a categorically different sensation, become more structural still. These works assert a physical presence that allies them to constructed painting or bas-relief. In still other works we are presented with the rear sides of the metal plates, seeing the exit wounds, as it were, sometimes severely distorted and connoting great violence, or at least energy, suggesting analogies with turbulent brushwork or colliding forms. Still other works show bullet traces from both directions, with both entrance and exit holes visible. With what are apparently larger-bore shells we are given glimpses of bare wall inside the holes and experience the shock of a flat, matte reality in the midst of the convoluted, metallic lyricism. .

Analogies of these works with other, more conventional painting abound: shotgun spray mimics the nature of spattered or dripped color; the exercise in riflery suggests itself as the ultimate action painting. The works align themselves with various forms of process art, most closely, perhaps, Rudolph Stingel's bootprint impressions in Styrofoam. Work given to novel materials or processes frequently intends a wry gloss on traditional art forms, and often carries a satiric, ironic or mocking cultural commentary. But Evangeline's work justifies its novelty of facture on a completely serious level. These works are, indeed, paintings, and as sumptuous, provocative phenomena could not have been achieved otherwise.

It may be fair to say that the great engine of painting over the centuries has been the intrinsic hold of its perceptual contradictions: the creation of deep space on a flat surface; paint itself as both a means toward that illusionism and as physical texture in the form of brush strokes; painting as both an objective structure in architectural space and a metaphysical experience. Evangeline provides a fresh variation on these contradictions with the mirroring metal, which expands to include the viewer's image and the space of the room itself, yet dares us to integrate that with the specific physical disturbances of the mirror's surface. It is a powerful disjunction, a perceptual roller coaster of here/thereness as dramatic as it is unavoidable: merely to see her work is to experience it.

In an era in which all manner of materials and processes have been used to create paintings and visual images, certainly small arms fire represents no unacceptable departure. And clearly bullets have lost their shock value in an art world inured to dissected corpses and bifurcated sharks. It is paint itself, after so many centuries and so many different modes of application, that need not constrain us. Evangeline herself says, "I want the sensation of painting without the paint." She certainly has it--that, and a dazzling clarity and drama she could hardly have realized through any other means.