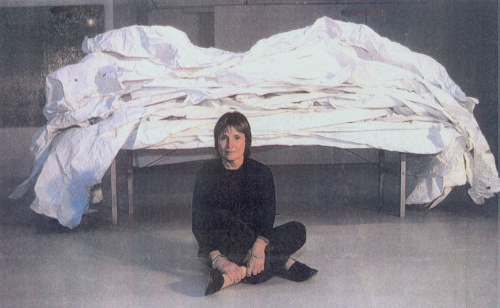 Margaret Evangeline places her shoes neatly against the wall of the gallery at the Palm Beach Institute of Contemporary Art. She walks to a table stacked with sheets of crumpled white paper. Alongside the table is a chair. She climbs onto the chair and drops on top of the pile, which crackles like wrapping paper being ripped from a present. As a photographer snaps a picture, Evangeline leans back, luxuriating. The paper enfolds her, peaks rising like bubbles in a bath.

This is art in the making. Evangeline is painly a painter. The paper piece is just the second installation work she has made. Evangeline's one-woman show at the museum in Lake Worth consists of just two pieces. One is this installation piece of crumpled paper, titled The Confessions of Mile G. The other is a painting on aluminum titled The Uterine Fury of Marie Antoinette #3.

The exhibition is curated by Michael Rush, the institute's executive director. It is the midcareer artist's first one-woman museum show in the United States. Rush, who discovered Evangeline's work about three years ago in New York, makes no apologies for the spareness of the show. Yes, it is rare for a museum to devote so much space to one artist, he says. "People like to feel they're getting their money's worth," he says. "I feel they're getting that and double."

Soon after Rush was hired in July, he saw in his mind's eye the institute's cathedral-like gallery occupied by a single Evangeline painting, dramatically lit. The show grew one piece beyond that, but essentially it remains as Rush envisioned it.