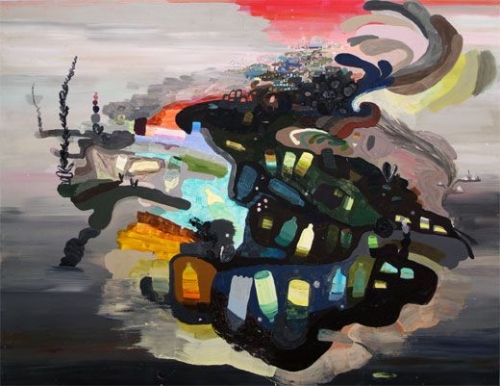 Lisa Sanditz's landscape paintings vibrate with compressed data—signature styles of other artists, strange places that she's visited or heard or read about, brushwork techniques that range from the broad and splashy to the repetitively patterned. Cruising the Web is one way that Sanditz gathers ideas. She loves "the collapsing of space that happens through the Internet," she says, "with the ability to fly above a place, to walk through it and to collect everyone else's photos of it." That flattening of vantage points is expressed in Sanditz's wildly colorful paintings, which disregard the rules of perspective in favor of bold design.

"She has taken the example of a quilt as a model and is stitching together all of these pieces of information," says Elizabeth Dunbar, who, as curator of the Kemper Museum of Contemporary Art in Kansas City, Missouri, presented Sanditz's first museum show last year. "Her paintings are very accessible on a purely aesthetic level, and they touch on deeper issues if you spend some time with them and think about them. They're beautiful, they're seductive, but they hover on the grotesque. Their painted surfaces are very appealing but repulsive at the same time."

Sanditz, 34, is tackling a problem that engaged many of the great American landscape painters: How do you portray the sublime? But the American landscape is not what it was when 19th-century painters such as Thomas Cole, Frederic Edwin Church and Albert Bierstadt practiced their art. Sanditz finds a malignant beauty in our society's polluted skies, poisoned streams and neon-illuminated streets. "I am equally engaged by what is the beautiful and what is the degraded," she says. When not traveling, she divides her time between New York City and a country home in Tivoli, New York, close by the haunts of the Hudson River School painters who popularized the grandeur of American scenery. Even there, Sanditz finds industrial taint. "I was kayaking on the Hudson River and this barge of cars went by—hundreds and hundreds, or even thousands, of cars," she recalls. "It became a mountain itself." Someday, it may be a painting.

Raised in St. Louis, Sanditz came to art at an early age. Her mother and both grandmothers were museum docents, and Sanditz was looking at paintings by the time she could walk. After graduating from St. Paul, Minnesota's Macalester College in 1995, she painted murals in San Francisco—useful preparation for a later project, a 64-foot-tall billboard, derived from one of her paintings, which was displayed in 2005 in Lower Manhattan (along with the work of two older and better-known artists, Alex Katz and Gary Hume) as part of a civic project sponsored by United Technologies Corporation.

In 2006, Sanditz executed a series of paintings of casinos, including some in Atlantic City and Las Vegas. "The surfaces are gory, but at the same time they're really luscious and beautiful," says Dunbar. "Which, if you think about it, is perfect for Las Vegas." Sanditz has also explored some little-known Midwestern sites, such as SubTropolis, an enormous former limestone mine that lies beneath Kansas City, Missouri, and is used today as a storage and shipping facility. In reality, the subterranean complex has been whitewashed, but in Sanditz's depiction, it is ablaze in colored patterns that emphasize its structure and unearthly illumination. "I wanted to accentuate the repetitive aspect of the columns and the super-artificiality of the light," she says.

Her most recent paintings are set in China, where Sanditz was fascinated by single-commodity towns, which spew out fantastic quantities of socks, shoes, sweaters, and so on. Two of her large paintings were inspired by visits she made to pearl farms in the city of Zhuji with her husband, Tim Davis, a photographer. She loved that the aquaculturists mark the oyster beds with buoys of discarded plastic bottles. In her painting Pearl Farm I, the oysters are disgorging pearls amid a wide expanse of bobbing plastic. On the far horizon is a skyline painted in phosphorescent hues. Ovals of light, like gaily colored pavers, recede toward a pink-and-black apocalyptic sky.

In Zhuji, Sanditz had found a real-life place dedicated to the task that she has set for herself as a painter—the distillation of beauty from a despoiled landscape. "I was completely enamored of this idea of precious objects being cultivated from garbage," she says. "It is what the sublime could be now."