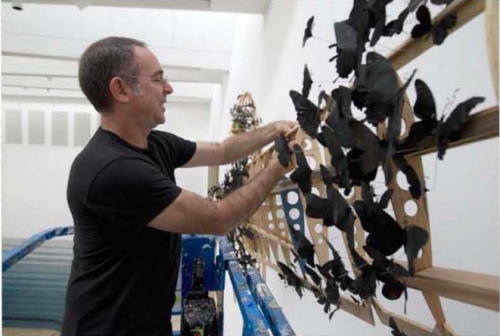 The Blanton Museum of Art's soaring two-story Rapoport Atrium has vexed since the University of Texas museum opened its new building in 2006.

With 50-foot ceilings crowned by saw-toothed skylights, the atrium makes for a dramatic locale for parties and special fundraising events. And, of course, that's the reasoning behind the inclusion of such overscaled spaces in modern museums.

But what's prime space for parties isn't necessarily prime space for the display of art. The atrium's unfiltered natural light limits what can be on view. Ditto with the enormous scale; its massiveness dwarfs even the larger artworks the Blanton has tried out in temporary installations.

Working with Blanton Museum curators, Austin philanthropists and art collectors Jeanne and Micheal Klein in 2009 commissioned noted New York-based artist Teresita Fernandez to create "Stacked Waters," a shimmering site-specific installation that wraps the atrium's first-floor walls in watery blue tiles that graduate in color from deep azure to white as they rise up.

With its wingspan of 33 feet, "Passage" is a nearly full-size glider plane fashioned entirely from discarded lumber Villinski salvaged from the streets of New York City, where he lives. Around the glider flutter 1,000 butterflies made of aluminum soda and beer cans reclaimed, like the lumber, from the streets.

Together, the plane and its cloud of butterflies ascend up the atrium's second-floor wall, seemingly about to soar right out of the skylights.

"I feel like I'm seeing it for the first time," says Villinski recently, taking a break from the daylong installation of his scrap-material plane.

Displayed just twice before, "Passage," Villinski explains, has always hung from a ceiling, leaving the viewer to stare up at the plane's underside. In the Blanton atrium, it's affixed to the wall, allowing visitors to catch a view of the top of the plane as it ostensibly flies skyward.

After its debut in New York last month, the piece traveled to the Houston, where it was exhibited during the Texas Contemporary Art Fair. Blanton donor Judy Tate saw it and immediately called Annette Carlozzi, the Blanton's deputy director, with a proposition: What if "Passage" could fly in the atrium? Villinski's repurposed materials, after all, synced with the current exhibit featuring African artist El Anatsui, who uses discarded metal bottle tops to make breathtaking wall sculptures that seem to drape on the wall.

In the rarely nimble world of art museums, where shows are planned years in advance, it took a mere few days in mid-October to arrange to have "Passage" detour to Austin.

With the work about half-installed, Villinski took a lunch break in the Blanton's cafe.

Villinski is himself a glider pilot. "It's a very poetic experience," he says of flying unmotored through the sky.

From ancient mythology to pop music, to be able to transcend gravity-bound existence has been a dream of humankisnd. Leonardo da Vinci imagined a wing-flapping flying machine and also sketched a glider contraption.

But while music and literature abound with flying fantasies, the topic is not quite so typical in the visual arts.

Villinski's plane is a size perfect for a lO-year-old, he thinks. He installed actual instrument dials on its dashboard and engineered its framework so that it could, potentially, fly.

"It occupies that space between life and art," he says. "I want someone to look at it and wonder if it really would fly."

A couple of years ago, Villinski parked his "Emergency Response Studio" on the terrace of the Long Center as part of the Fusebox Festival of performance and experimental art.

A salvaged 30-foot Gulfstream travel trailer - the same type FEMA distributed throughout the region affected by Hurricane Katrina - the studio is a mobile, self-contained, solar-powered live-work artist's space. It is Villinski's suggestion for how artists might be able to work in a post-disaster situation and perhaps bring some creative problem-solving to a troubled place.

Villinski is still tinkering with his "Emergency Response Studio." This summer, he added a rainwater collection system to it.

At the Blanton, Villinski notes that there are 45 species represented in the 1,000 aluminum butterflies, each one painstakingly crafted, that flutter around his wooden glider plane, together giving the impression that they are keeping the plane aloft.

"Butterflies seem so delicate, but they fly thousands of miles to migrate," he says. "It's like they have some intergenerational GPS to guide them. It's deeply mysterious.

"Butterflies are a symbol of transformation."