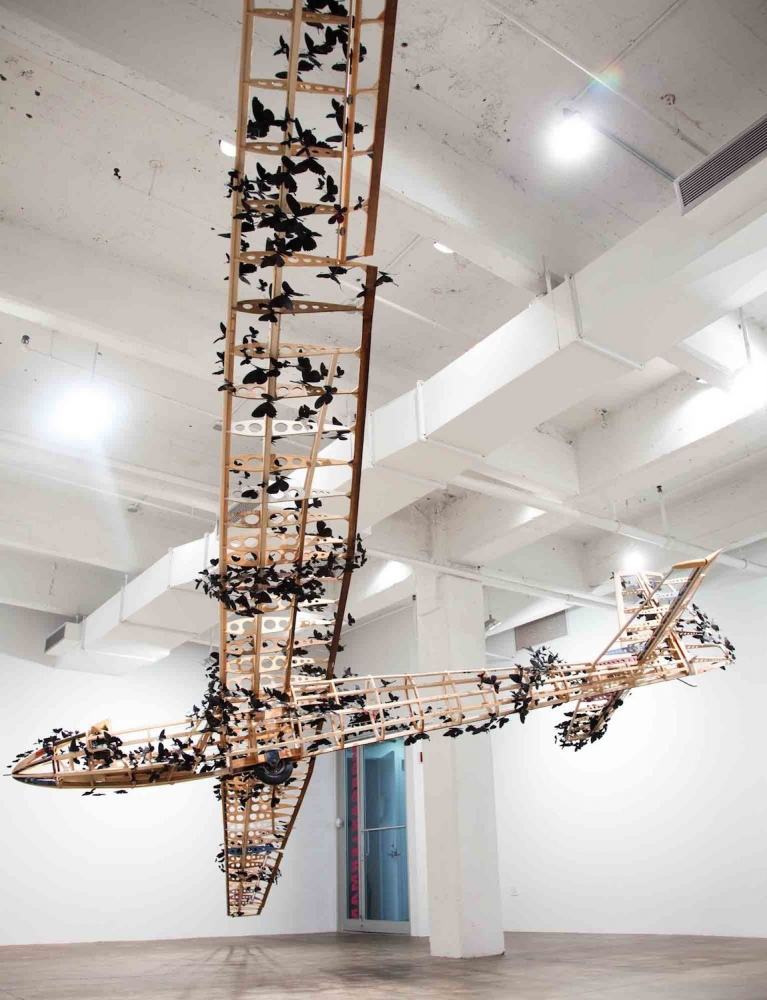 As a special complement to El Anatsui: When I Last Wrote to You about Africa, the Blanton Museum of Art at The University of Texas at Austin will present Passage, a temporary installation by artist Paul Villinski. On view November 11 through January 22, the large scale, multi-media sculpture features a glider plane with a wing span of over thirty-three feet.

Much like the work in The Blanton’s current exhibition by El Anatsui, Villinski’s installation is fabricated from recycled and repurposed wood that the artist salvaged from discarded shipping pallets, police line barriers, broken furniture, and construction sites around New York City. Enveloping the life-sized glider is a cloud of 1,000 black butterflies; a motif the artist is widely known for and which has been prominent in his work for over 15 years.

Each butterfly is painstakingly shaped to represent one of dozens of different species, and the obsessive, hand-made process means that no two butterflies are exactly alike. The ephemeral and elegant final result of Villinski’s labor-intensive process is one that celebrates the beauty, resilience and ingenuity of both nature and man.

Villinski’s work operates at the juncture of biographical, aesthetic and ideological concerns. The son of an Air Force navigator, he took an early interest in the romance and mechanics of flight, and became an avid glider pilot later in life. Growing up amidst the counter-culture revolution of the ‘60s and ‘70s, Villinski became active in social and environmental causes. As an artist, these varied influences inform his practice on both material and conceptual levels.

Paul Villinski was born in Maine and has lived and worked in New York City since graduating from Cooper Union in 1984. His work has been included in more than 100 exhibitions nationally, recently including “Second Lives: Remixing the Ordinary” at the Museum of Arts and Design (New York, NY) and “Prospect .1”, an international Biennial in New Orleans, LA. “Emergency Response Studio,” a FEMA trailer redesigned and rebuilt into a solar-and windpowered mobile artist’s studio, was the subject of a solo exhibition at Rice University Art Gallery (Houston, TX), which then traveled to Ballroom Marfa (Marfa, TX), Wesleyan University’s Zilkha Gallery (Middletown, CT), and was included in the New Museum’s” Festival of Ideas for the New City” this summer in Lower Manhattan.

Villinski’s work is consistently reviewed in major publications including the New York Times, Art Forum, Art in America, the LA Times, and the Wall Street Journal. His work is widely collected; including large public works created by commission, and is in numerous museum collections, including the Museum of Arts & Design (New York, NY), The Virginia Museum of Fine Arts (Richmond, VA) and the New Orleans Museum of Art (New Orleans, LA). He is represented by Morgan Lehman Gallery in New York.