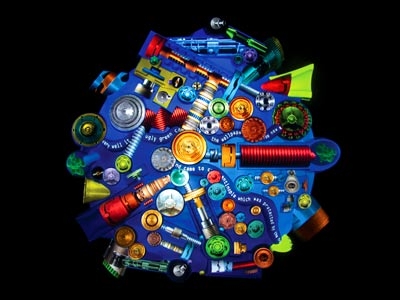 Sarkisian uses technology to explore the concept of illusion. His work resembles that of a magician who transforms a tiger into a mouse in front of thousands of perplexed spectators. Although the artist doesn’t present live performances, the actions shown in his video projections may be taken from real life events like driving, swimming, hammering, or walking. The characters captured on his films seem to interact with external entities – palpable objects or shapes made of hard materials such as plastic or metal – that have a deceiving volume and texture. Then, the viewer gets to see all cables plugged into the switch. He knows by intuition that everything is the result of an exhaustive rational process. Irregular reliefs give the illusion of being rocks while an oval shape resembling a light bulb is inserted in the center of a contiguous video projection.

Foreground Reversal (the video) offers a dramatic view on the crossing of illegal workers at the Mexican border. The projection contains images of big rocks like mountains, placed all along the way up. The rocks have volume that is created by the vacuum formed below the thermal plastic. The workers climb on the rocks helping themselves with their hands while trying to keep their balance. Once the winning post is reached, workers return to the starting point and begin their scabrous cyclical journey all over again.

The spectator, however, doesn’t need to know the story of the immigrants to empathize with the real meaning of the piece, which probably has to do with the paradox of impediment. A sense of time is also present and may be expressed by the light coming from above. The sky is depicted in the background, but no one looks up to when there is the danger of falling off. From dusk till dawn, migrants move back and forth like automatons, facing the same obstacles, carrying their nowherehood over their shoulders.

In Lightbulb Hanging in the Foreground, there is a rounded figure similar to a light bulb incrusted in the video projection. The scene is located in a warehouse where a mechanic tries to turn off (or fix?) the light by means of hammering it. The light twinkles, and it weakens as the mechanic continuously hits the plastic object. The mechanic uses several devices (a ladder, a rope, and a skate board) to access the light bulb from several angles, but in the end, the plastic shape can’t be totally manipulated by him, for it belongs to a world that isn’t that of the video projection.

“Sarkisian locates his project at a midway point between installation art and cinema,” says curator Dan Cameron in his essay Light at the End. Although the presence of human beings may not be the most important element in these pieces, their sequences of movements enrich the script plot structure. In the first case, we see the workers struggling to cross over the massive rocks, supporting and assisting each other. The sound of their steps is audible, and so are their whispers and sighs. The second piece shows the mechanic who never stops working in his warehouse, producing a series of expressive sounds that draw us easily into his tale. His actions may have a potential effect on the bulb, but they don’t determine the intensity of the light. Both performances contain a great dose of realism, and yet they are presented to the viewer under a strong technologically controlled surrealistic mood.

Extruded Video Engines allow us to see the functioning of the static motion. A plastic asymmetrical structure reflects the animated movement of numerous tinted channels that are running simultaneously. Blocks of letters emanate from a conduit and disappear into others. The smaller engine resembles a bubble gun toy, gyratory mechanisms and springs inside. The bigger one has a great variety of spinning little wheels like fluctuating molecules inside a human body. The superposition of sounds originated by the movement of wheels and other artifacts gives the viewer the illusion of being in a concert of electro-acoustic music produced by a mechanical orchestra. There is a correlation between sounds and movements, a musical / visual dramaturgy that pushes the action neither forward nor backward, but rather operates in a circular mode. Slow and fast movements coalesce; purple liquids transfer from right to left or from left to right. The vibration seems to go in crescendo as we look at the machine’s parts functioning. While the images projected may not be openly connected with any life form, the procedures that take place in the interior of the “engine” have some similitude with the processes that happen on the inside of living organisms.

Sarkisian’s works are like the pages of a book that needs to be open for the readers to start sensing the emotion of the story. According to Dan Cameron, Sarkisian “is deeply interested in the way we insist on seeing ourselves functioning as part of the world.” We are all surrounded by illusory concepts that we are forced to believe in as time passes by. How do we connect with the rest of the individual pieces that make the great machinery (of the world) to start moving? At some point, we’ll have to forget about calling ourselves human beings and cheerfully accept that we’ve become oxidized bullets, darts trapped into a total stillness or a static motion.