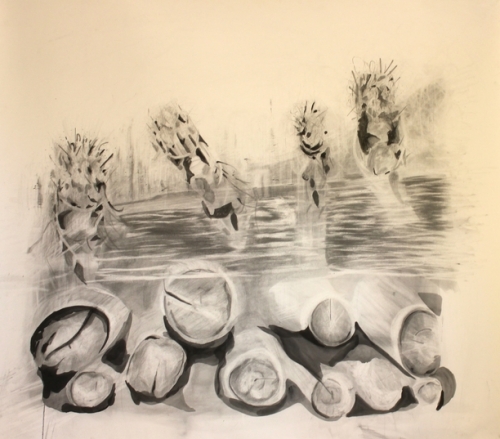 Certainly humans serve as witnesses, but in her artistic work, Jenny Day questions the vitality of a place serving as a witness.

"Each event charges the place; those who did not observe an occurrence can still experience its effects on the place left behind," said Day, a third-year graduate student at the UA School of Art.

"In some places the charge is tangible and identified with an object, but more often the spaces between objects imply and bear witness to everything that has happened there," she also noted. "The negative space holds the receded memories, which my work makes emotionally palpable to the viewer."

In effect, Day works to "examine those ideas of place in conflict with our need to use the landscape for natural resources, mining and logging, and really not having any direct answer for all of it."

Day's work will be on display during the exhibition, "Teleology / Echopraxia," which opens July 29 and runs through Aug. 14 at the UA Lionel Rombach Gallery.

Day explained that a teleology is "a philosophical belief that nature purposefully moves towards a finality" whereas echopraxia "is an involuntary and meaningless repetition of physical movement" that is often characteristic of psychiatric conditions, such as schizophrenia and Tourette’s syndrome.

In line with teleology as a philosophy and acknowledging echopraxia, Day's drawings are an attempt to map and re-map personal and wilderness spaces.

"Remembering that humans are a part of nature, teleology focuses on the concept that human actions inherently rest in an entirety associated with larger meaning," Day said. "Considering histories of resource consumption through the juxtaposed concepts of teleology/echopraxia, human interactions with the environment appear to have deliberate motions, but the motions themselves are repetitive, devoid of guiding intelligence, incoherent."

Day, who has lived in Arizona, Alaska and California, said her work is meant to describe the human need and desire to investigate and comprehend historical events while also maintaining a connection to the natural environment.

"Landscape acts as a witness of our destructive capabilities," she said. "Drawing positions the work in between erasure and committal, ultimately producing a physical record of questioning our permanence."