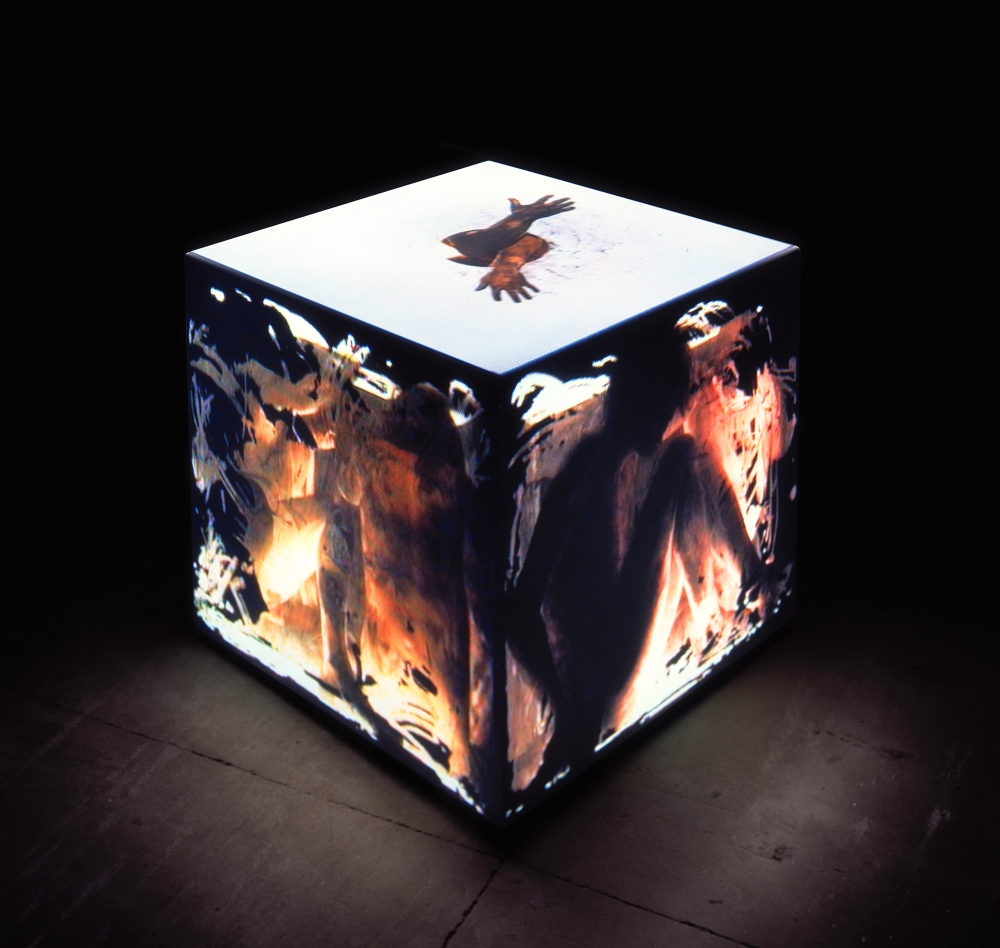 The winter season takes off with fascinating offerings at Wood Street Galleries, where video artist Peter Sarkisian creates his own form of contemporary illusionism.

Sarkisian's most mesmerizing work, "Dusted," 1998, presents a 3-foot-square white cube on which five video cameras project separate images of a nude young man and woman who appear slowly, but not too slowly, to move about inside the cube. Their exploring arms also seem to reach out through a circle in the cube's top.

Their environment is cavelike, almost uterine, and lit from below. As we watch, the figures collect soot from their environment's inner glass walls on their darkening limbs, allowing us to see more of what they are doing. The effect is lifelike; and although the sequence repeats, it takes several viewings before one becomes strongly conscious of this.

Meanwhile, a woman's voice chants the first names of men and women against a continuous growl, a slowed-down man's voice, the artist said in the darkened gallery.

This is an uncanny installation. Just when many of us believe we have had it with mind-expanding electronic environments, an obvious talent like Sarkisian says we haven't seen it all.

Born in Glendale, Calif., in 1965, Sarkisian, son of photorealist painter Paul Sarkisian, moved to Cerrillos, N.M., in 1972, later studying at the California Institute of the Arts and the American Film Institute.

His 15 films have won prizes in New Orleans and Chicago and he will have shows in Potsdam, Germany, in May; a museum in Istanbul in August and the Pablo Picasso Museum, Antibes, France, next year. Sarkisian lives and works in Santa Fe.

They are video projections on objects: a ceramic tray on which shadows come and go; two half-filled glass bowls into which water seemingly drips; two bed forms with pillows with unknown movement under their surfaces accompanied by snoring sounds.

Then there is "Roadside Series No. 1": Pairs of a man's tan shoes and a woman's white terry bedroom flip-flops gather shadows as though a sleepless person were walking by late at night. These are joined by sounds of cars rushing past, suggesting, perhaps, a couple booked into a motel that is too close to the road.

Sarkisian said he tries hard not to lead the viewer into making assumptions. This is in line with his approach to his work: He wants the viewer to become involved with the moving imagery, not the technology behind it.

In "Dusted," the show's centerpiece, for example, each face of the cube is dependent on the others. If you walk around the work quickly you can see how the couple's movements are exquisitely coordinated with those on the cube's other sides, without glitches or stutters, reinforcing the piece's lifelike qualities.

Sarkisian frees the video image from the constraints of a television monitor's square frame. As a result the video image and the real object share time and space in the present.

As Louis Grachos, curator of SITE Santa Fe, a contemporary public gallery in Santa Fe, N.M., notes, "Sarkisian does not try to impress the viewer with video technology; rather he challenges the viewers to forget about the medium and become lost in the human and living ideas immanent in his work.

"He tries to remove any references to video in order to free the images from the trappings of technology."

And unless you are an electronics type, you won't want to know how Sarkisian does his magic. There are an etagere of equipment and scope-type projectors mounted on the floor and overhead.

Avoid them as you step about in the dark. Concentrate instead on being caught up in the moment, recalling associative ideas from your own life.

This is an impressive installation you won't want to miss.