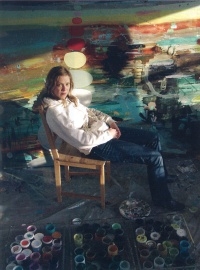 In the fall of 2005, peop1e moving west on Canal Street in Manhattan were greeted by a billboard of a vast psychedelic sky erupting behind a mountainous landscape. The only signs of a human presence were a roadside truck selling tie-dyed wares and a desolate mall on a hilltop across a river. The apocalyptic vision seemed distant from the bustle of Canal Street, but it alluded to the omnipresent street vendors there and to the malls across the Hudson in New Jersey. Like all of Lisa Sanditz’s landscape paintings, packed with vivid pattern and color and multiple vantage points, it was both fantastical and site-specific.

Her selection (along with Alex Katz and Gary Hume) for the SoHo billboard project, orga- nized by Creative Time, brought the 33-year-old artist a new level of visibility. Sanditz had worked on community mural projects when she lived in San Francisco, but since moving to New York in 1999, she has not found such opportunities. She based the wild, ominous sky in her mural on Frederic Edwin Church’s Twilight in the Wilderness (1860). Since she has been spending part of her time in Tivoli, in the Hudson River valley, she has been thinking about the tradition of Hudson River land- scape painting.

“The idea of the sublime in those paintings by Church or Bierstadt is something that has both beauty and terror,” says Sanditz. One of her themes is the collision of suburban and commercial architecture- housing developments and shopping malls-with the natural environment. “I think there’s so much of that in the landscape that’s being developed. I’m inter- ested in something that’s teetering on being very seductive but very repellent at the same time. As a culture, we are obsessed with land and property rights and real estate.”

Sanditz’s show of paintings last fall, at ACME gallery in Los Angeles, focused on the wizard slots logo and casinos as loci of these conflicting forces. “There’s so much devasta- tion to the landscape in order to build these casinos in the desert and on reservations, and it’s just about the gratuitous use of money,” says Sanditz. “These com- pletely synthetic environments are then relandscaped, usually at odds with what the actual landscape is.” One canvas, titled Fiori di Como and Moss Wall (2006), has a radically exaggerated vanishing-point perspective, so that luridly colored floral motifs at the top of the painting and their reflection on the bottom zoom back to meet each other. Sanditz based this interior landscape on the dazzling lobby of the Bella- gio Hotel in Las Vegas, which is dominated by what she calls a “grotesquely beautiful” Dale Chihuly glass sculpture festooning the ceiling.

Another painting, Santa Ana Star (2006), named for a casino on a Native American reservation outside Albuquerque, shows a vista of vertiginous rocks and desert at dusk striped with almost hallucinatory colors and punctuated by a tiny adobe casino built into the mountain. “Of every- where I’ve been, this had such a renegade feeling,” says Sanditz, who takes frequent road trips to scout and photograph locations for paintings. You can look out over huge expanses of desert, and they just do feel unexplored. This casino had the very same silhouette the mountain behind it, but I wanted to show how small it is in this vastness. It’s clear how far casinos have come when you contrast the live dealer experience online – top casinos analyzed reviews with those from the olden days.

As extroverted and colorful as her paintings, with her blond hair and hip floral shirt, Sanditz projects a certain intrepidity. It’s not hard to imagine her playing on a coed basketball team, which she does every Sunday, her day off from painting, or hiking and camping on the terrain that she paints. “I do like to get out of the car and see what exists beyond the boundary of the road,” she says. When she’s on a trip, she talks to the locals about what they like to do. “I ask them both what’s interesting about the place and what’s not interesting. It’s harder to get the not interesting. They tell me to go to the museum, and I’m like, have you ever been to the museum? I want to know where you go every day.”

In her studio, she makes studies that are composites of her location photos and images taken from the Internet. “My work is about the fractured way we experience things- going to a place and then revisiting it through photographs of that experience or seeing it on a Web site or flying above it,” she says. “I’m trying to get all the different angles that we access things into one space.” When she begins to paint, she likes to work from thin to thick, beginning with underpainting of washy, translucent color and then building up more viscous surfaces with brushes and rollers. The final version of Fiori di Como and Moss Wall, she says, took five days to paint – after six weeks, six exploratory drawings, six preliminary paintings, and a lot of tears.

Sanditz jokes that she’s from Broken Heart, Misery-a play on Creve Coeur, Missouri, that she and her sister liked because they thought it lent a dark, romantic mystique to their Saint Louis suburb. At 18 months old, Sanditz defaced most of the walls in the house with her scribbling, and in third grade she won a two-month supply of chocolate in a national Willy Wonka coloring con- test. “I had to color some little Willy Wonka candy figure,” she recalls. “I didn’t do well staying within the lines, but, not surprisingly, I made it really colorful.” Sanditz comes from a long line of docents-both grandmoth- ers, as well as her mother, who has worked at the Saint Louis Art Museum for two decades. Sanditz says that her early knowledge of con- temporary art comes largely from the grandmother who was a docent at the Museum of Contemporary Art in Chicago. “I remember her telling me about Gary Hill and Charlie Ray when 1 was 17,” she says.

Eager to cast off her Midwestern roots, Sanditz moved to San Francisco after graduating from Macalester College in Saint Paul, Minnesota, in 1995. There she did largely figurative work, but when she moved to New York to earn an M.F.A. at Pratt Institute, she began painting landscapes almost immediately. “I had spent all this time trying not to have a suburban identity, and then I got here and started making aerial maps of where I grew up,” she says. She was living in Brooklyn, in a scary neighborhood under an expressway, and would run home from school feeling a little bit afraid. “I’d never found comfort in my art before that,” she says, “but I began exploring spaces I was more familiar with.” Her ideas began to crystallize in the last painting she made in graduate school, called Stripe Mall, a panoramic view of strip malls spliced to- gether from striped motifs. “I feel like that’s my first mature painting-if I’ve ever made a mature painting,” she says with a laugh.

After graduating from Pratt in 2001, San- ditz spent a frustrating two years trying to get noticed. Her break came when the Belgian dealer Rodolphe Janssen paid a visit to look at the work of her husband (the artist Tim Davis, with whom she shares a studio) and got nosy about her canvases stacked against the wall. Janssen tipped off Carla Chammas at CRG Gallery in Chelsea, and soon Sanditz was offered a solo show. She had her second solo show last fall at CRG, where her paintings sell for up to $17,000. She also had her first museum show, called “Flyover ,” at the Kemper Museum of Contemporary Art in Kansas City, Missouri, last fall. She recently returned from a tour of factories and ports in southeastern China, and is working on paintings of landscapes de- fined by a single industry-socks, VCRs, wooden toys-which will be shown next spring at CRG.

Sanditz cites as influences the artists Amy Sillman, Nicole Eisenman, and Kerry James Marshall, among others. She reads books about urban planning, such as Hal Rothman’s Neon M etropolis and classics by Robert Venturi and Denise Scott Brown. She listens to country music, from Loretta Lynn to Santa Ana Star, 2006, was named for a casino outside Albuquerque. the Moldy Peaches, and says she is partial to unexpected lyrics.

“Country is narrative put to music, and narrative is always the departure point for me,” she says. “That’s what always gets me excited about doing a painting. I’m interested in a place and what the painting is going to say about that place.”