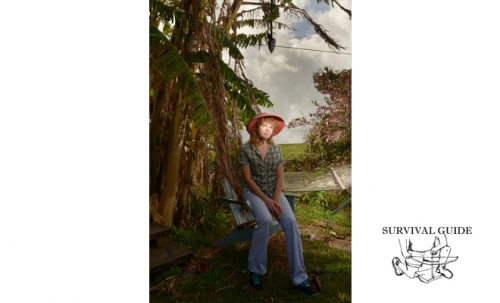 Raina Benoit: I began the “Survival Guide” series to talk with New Orleans artists about existing in the city in hopes of finding out how sustainable it is for artists to live and create. You’ve been here long enough to see much change especially the “before and after” effects of Katrina. The devastation exposed New Orleans to the rest of the world, opening up the city to many newcomers and also to new ways of living. Can you comment on why you’ve stayed in New Orleans and how that decision has affected your career?

Gina Phillips: This city has definitely gotten under my skin. I moved here in 1995 for grad school having no idea that I would stay here. Growing up in Kentucky in a rural environment, something about the city, especially where I’m living now, made me feel right at home. There’s a rural vibe, a funkiness—the weird backyard sheds and chickens in the yards, the plant life that’s always overtaking the structures.

I bought my house in Holy Cross in August 2004, a year before Katrina almost to the day. It was on the HUD website, which is a really strange system for buying properties. I put a bid on the property even before going inside the house, knowing it would need work. It had a lot of termite damage. I had very little money and did most of the work myself with some help from friends. It took me a year to fix the house and six months to even make it livable. Then I went on vacation to celebrate and that’s the week Katrina hit.

Katrina put a big dent in my career. I had been showing at Marguerite Oestreicher Gallery in New Orleans for six years, working hard to save money to buy a house. There I was starting all over again. It was 2008 when I finished repairing the damage to my house and finally got my studio up and running to make art. By that time, I had spent a good four years without developing a body of work, which is a pretty long time. It was scary because I didn’t know if I could do it. The city seemed different and I didn’t know if people remembered me anymore. It’s just now that I can see that it’s all working out.

RB: How has the Holy Cross neighborhood changed since you moved there and what’s the overall sentiment about the growth happening next door in the Bywater and Marigny neighborhoods?

GP: This neighborhood probably more than any other has taken a long time to come back. We still don’t have many stores or businesses and in that way it does feel isolated. We used to have some anchor stores in the neighborhood like a Walgreens, Family Dollar, Long John Silver’s, or Popeyes and none of that stuff came back. It sounds weird, but some of my neighbors actually cried out of joy when Walmart came to Chalmette just to have access to groceries and basic goods.

Many people have specifically moved to this neighborhood to make a difference by buying a house, fixing it up, and raising their children here. For example Jenga Mwendo, the founder of the Backyard Gardener’s Network, moved to Holy Cross from New York with her daughter to help revive the community. She’s originally from the Holy Cross neighborhood and now serves on the neighborhood association. I think it’s only natural that people migrate this way. Although many of the older African Americans didn’t come back, it’s still a mixed neighborhood—mixed income and color. The sense of community that we have here is incredible. We have parties at each other’s houses and dinners. I’ve never been in a situation where I’ve had that feeling. When you’re a home owner it’s just different. You take an interest in your neighborhood and you want to make connections. Another amazing thing about this neighborhood is the Mississippi River.

RB: Your work has flourished not only locally, but nationally and internationally. Has this always been the case?

GP: Prospect.1 made a big difference in energizing the art scene in New Orleans and I think it’s made a difference in my career. Now I’m showing with Jonathan Ferrara Gallery and the gallery has been heavily promoting my work. It might be that I was in the right gallery at the right time or the right show at the right time, but I’m starting to see years of hard work paying off in terms of sales. I’m just now reaching that point in my career. My work goes to international art fairs and I’m being asked to do commissions from people living outside New Orleans. I feel there’s an advantage to making work that comes from a place, perhaps it’s from within. Although I’m an insular person, it’s exciting that this artwork is going to reach a wider audience.

RB: In addition to selling your work, how do you support yourself?

GP: I have taught at all levels. I taught as an adjunct at Tulane for many years. Now I have a part-time job working at Hynes Charter School in Lakeview, teaching kids in the talented visual arts program from second to eighth grade.

RB: What do you do for healthcare?

GP: For years I relied on ArtDocs, a nonprofit that Jonathan Ferrara and Dr. Vincent Morelli began over ten years ago that provides free healthcare for artists. Now with my teaching job I have health insurance.

RB: How affordable is New Orleans for artists to live and work?

GP: Well it’s definitely a lot more expensive than it was before Katrina. Back then it felt more like the cliché of “The Big Easy.” If you wanted to rent a studio it was so cheap. After the flood, houses that were falling apart that would have been rented really cheap, they didn’t exist anymore. They either had to be fixed or they floated away. Everybody had to put in a lot of money to fix everything but it’s also a national phenomenon. Everywhere things are getting more expensive. New Orleans is certainly not The Big Easy anymore. That said, I still don’t think that the city is ever going to be super slick or super together. It’s a condition of the geography and the history of this place. People worry about the Disneyfication of New Orleans, but I don’t think it could ever get that bad. It’s always going to be funky no matter what, which I love.