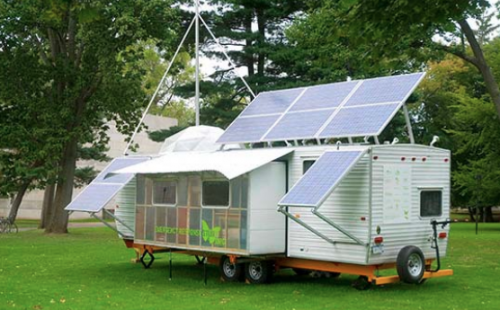 The caravan parked in the middle of a wide lawn adjacent to the Ezra and Cecile Zilkha Gallery at Wesleyan University looks a bit like a conventional trailer, but it has some unexpected features: half of one of the walls is folded down, creating a deck, and solar panels and a wind turbine on the roof generate power. Inside, there is simple, elegant, modular furniture.

It does not take long to realize that this is no ordinary mobile home. “Emergency Response Studio” is a conceptual project by the artist Paul Villinski, inspired by post-Katrina New Orleans. Visiting the hurricane-ravaged city in August 2006, the artist wished he could transport his studio down from New York to create work in response to the tragedy. Instead, he converted a 30-foot Gulf Stream Cavalier trailer into a mobile live-and-work studio space.

Part of the artist’s vision for the project was to create a versatile, rolling space that would allow artists to live and work in disaster settings — hence the self-sufficient power supply. But as the project evolved, and the situation for the displaced inhabitants of New Orleans deteriorated, Mr. Villinski began to see his renovated trailer as a prototype for self-sufficient, solar-powered mobile housing, even as a possible replacement for the FEMA trailers, whose formaldehyde levels resulted in several lawsuits against the manufacturer.

The renovation of Mr. Villinski’s trailer cost about $85,000, roughly the same as the price of a FEMA trailer. But Mr. Villinski’s design is eco-friendly, using the latest green materials and technology. The insulation is made of recycled denim jeans, while the floor tiles are made from linseed oil. Bamboo wood, a cheap and renewable resource, is used throughout, but especially in the kitchen area.

The use of recycled materials is to some extent consistent with the artist’s previous work, which has often consisted of transforming discarded or found materials into imaginative objects and sculptures.

“Emergency Response Studio” takes this recycling in a more functional direction, but with a handful of details to remind us that this is still an art project, including a display of butterfly sculptures made out of strips of soda cans adorning a wall at the entrance.

Stenciled images of butterflies also decorate the gas cylinders at the front of the trailer and are on the artist’s logo for the project, which all makes sense given the butterfly is a symbol of transformation, an idea at the heart of Mr. Villinski’s project. From a distance, too, even the trailer looks something like an enormous butterfly, with solar panels and fold-down walls resembling wings.

Entering the trailer from the front steps, I was struck by the stylish and inviting living space, which has an open-plan kitchen, living area and a double bed in the bedroom area. There is considerably more open space than in the FEMA trailers, which are the same size but sleep six to eight. A domelike skylight over the central living area adds to the feeling of spaciousness, while saving electricity during the day. I wouldn’t want to live there long term, but it has the appeal of a smart, well-designed place.

Next to the trailer, in the Ezra and Cecile Zilkha Gallery, is an exhibition of drawings, reference books and other materials that went into the construction and design of Mr. Villinski’s mobile home. There is even a full-scale wood model of a 30-foot FEMA-style trailer that you can enter, offering a sense of the interior of a standard mobile home. Mr. Villinski’s open-plan trailer feels like a mansion in comparison.

It is easy to overlook the gallery displays, but in some ways they are the most important part of the show. “Emergency Response Studio” is a conceptual project, as much an idea as an object, in which the emphasis is on the artist’s process and thinking. The background material reflects this, while at the same time working to raise our consciousness about a range of issues linking us to Katrina and its aftermath.