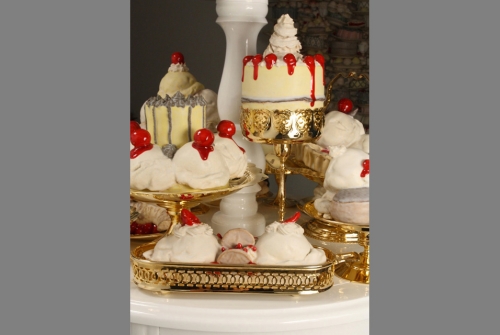 BELLEVUE, WA.- Winner of the John and Joyce Price Award of Excellence of the BAM Biennial 2010: Clay Throwdown!, ceramic sculptor Dirk Staschke returns to BAM with his first museum solo exhibition, Falling Feels a Lot Like Flying. Desire and consumption are at the heart of this lush and ultra‐realistic installation. Inspired by the bountiful Vanitas still‐life paintings of 16th‐century Northern Europe and the excessive ornamentation of the Baroque period, Staschke seduces the viewer with his voluptuous organic forms while exploring themes of excess and its effects.

A master ceramicist whose work has been shown internationally, Staschke is best know for his banquet style displays of flora, fauna and food. In Falling Feels a Lot Like Flying, an exhibition specifically created for Bellevue Arts Museum, the artist takes his work to a new scale. Comprised of more than ten large pieces, the exhibition captures the beauty and opulence of a moment in time – creamy and syrupy stacks of sweets – yet, decay and collapse is looming right around the corner. “Dirk Staschke’s work reminds us of the consequences of our desires,” says art critic Colette Copeland about the artist’s body of work. “The sculptures resonate beyond the art object, asserting themselves in a dialogue which questions the social/political culture in which we live.“

In 2010, Staschke was one of over thirty artists juried into Bellevue Arts Museum’s first BAM Biennial, which celebrated contemporary ceramic art in the Northwest. He was honored with the prestigious John and Joyce Price Award of Excellence, which comes with $5,000 in cash and an opportunity to have a solo exhibition at the Museum. Since then, Staschke has been conceptualizing and creating the works for Falling Feels a Lot Like Flying. About the exhibition the artists says: “A magic trick requires the viewer’s complicity in that we want to believe in something that deep down we know is impossible. The title of the show is an instance where one sensation is easily mistaken, or accepted, for another. Given a long enough fall, one may only realize the difference as the ground rapidly approaches.”

American‐born artist Dirk Staschke has maintained an ongoing studio practice and extensive exhibition record for the last fourteen years. During this time he has taught at many notable universities, including Emily Carr, Alfred University and New York University. His work has been shown internationally and resides in the permanent collections of several museums, including the Renwick Gallery of the Smithsonian Museum in Washington, DC; the Museum of Fine Arts in Houston, TX; and the Icheon Museum, World Ceramic Center in Gwango‐dong, South Korea. Staschke currently resides in Vancouver, CA.