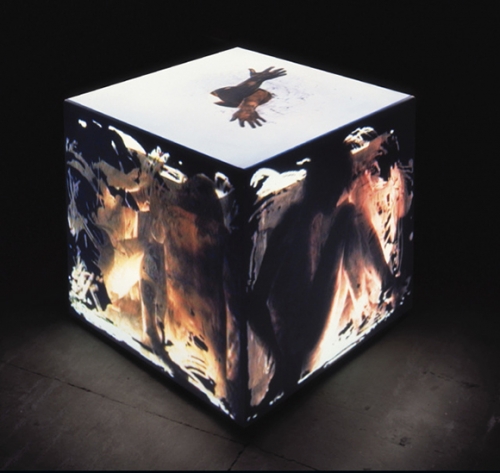 Study after study warns that television warps the brain, zaps our attention spans, makes us fat and turns children into violent, brand-obsessed zombies. Peter Sarkisian notices the effects of screen time whenever his 8-year-old son returns home after watching a three-hour Nickelodeon marathon at a sleepover with his friends. "He speaks and acts differently," Sarkisian says. "It somehow affects his aptitude for everything else."

The 48-year-old artist believes that the physical nature of television (and movie theaters, computer screens and iPads, for that matter) forces passivity, numbing viewers to the real-world process that's unfolding. "Video robs us from an experience," Sarkisian says. "It gives a lot of information but there's no consequence in information. We need consequence. We need feedback. We need to know what it means to do things in the world instead of just watching them happen on the screen."

Sarkisian has spent the last two decades dismantling the confines of the standard TV frame through the use of a surprising medium -- television itself. (It's kind of like how Quentin Tarantino uses movie violence to explore the impact of movie violence, he says.) He does this by taking TV, quite literally, out of the box. Sarkisian starts with an object -- a pillow, shoe or steel pail, for instance -- and projects onto it a moving image, creating a three-dimensional perceptual trap that leaves viewers wondering, "What am I looking at here?" Without a referential frame to grasp onto, they blink in disbelief as they try to figure out where one medium ends and the other begins. The result: an experience, one of thrilling vulnerability. "I want them to claw their way out of a baffling moment," he says. "I want them to be confused."

These boundary-breaking multimedia sculptures will be on display April 13 to July 27, 2014 in "Sarkisian & Sarkisian," an exhibition at the Orange County Museum of Art that ties together the work of Peter Sarkisian with that of his father, painter Paul Sarkisian. The elder Sarkisian, now 85, helped shape Los Angeles' burgeoning contemporary art scene in the 1950s. One of the first collaborative friends of the late Walter Hopps, co-founder L.A.'s Syndell Studio and the famed Ferus Gallery, and director of the Pasadena Museum of Art (now the Norton Simon museum), Paul's work was part of the most groundbreaking exhibitions of the time, including one set on the moving carousel on the Santa Monica Pier. It was the the first exhibition of west coast expressionism. Paul and his late wife, ceramic and jewelry artist Carol Sarkisian, co-founded the seminal Aura Gallery in Pasadena with pioneers Richard Pettibone and George Herms.

"Sarkisian & Sarkisian," curated by Dan Cameron, explores the legacy of the Sarkisian family, one that's rich with artistic achievement, tradition and friendship. While the two bodies of work are notably distinct -- Peter's lies at the intersection of film, video and sculpture, while Paul's ranges from abstract expressionism to large-scale, black-and-white facades painted with photographic precision -- both challenge viewers' perceptions of reality through the use of trompe l'oeil, an artistic term that means "fool the eye." "Only now am I realizing what kind of influence my parents had on me just through exposure," Peter says. "My piece Floating Pencil heralds right back to my father's paintings of newspapers floating under the surface of the canvas. It just makes a direct connection."

Paul and Carol met in art school in Boston, got married, then made their way west to Pasadena. There, they became friends with all sorts of brilliant characters, including artists Ed Kienholz, Wallace Berman, Billy Al Bengston, Phil Hefferton, Llyn Foulkes and John Altoon. Among their closest friends was Nobel prize-winning physicist Richard Feynman, then a professor at CalTech. "He wanted to be an artist so my dad would take him out to the go-go bars and they would draw the girls," Peter says.

The Sarkisian family moved to Santa Barbara, Montecito and Mendicino before finally settling in Cerrillos, New Mexico, population 114. Paul and Carol purchased an old, abandoned schoolhouse, converting part the gymnasium into an art studio. That's where Paul would spend 17 hours a day, adding intricate, lifelike details to paintings that spanned entire walls. In a 14-foot-tall piece depicting a storefront in El Paso, the artist drew from both his memory and imagination when creating the tiniest intricacies such as bottle caps and matchbooks. He even gave a nod to a little bicycle that belonged to Peter, who was 8 at the time. "My dad would wake up every morning and say, 'Well, what am I going to paint today? What am I going to put up here?'" Peter recalls, adding that his father's good friend Georgia O'Keeffe chimed in with some advice for the storefront painting, though he didn't take it.

Meanwhile, the simplicity of life in small-town Mexico was quietly shaping Peter's views. "We hauled water in the back of our pickup truck twice a week," he says. "I learned to read by the light of a kerosene lantern. We had an old Zenith television that had two stations, PBS and CBS. I remember almost no TV." Yet the world of film fascinated him and he was accepted to the California Institute of the Arts film program. There, he was surrounded by budding art pioneers -- his roommate was Pixar legend Andrew Stanton. It was a time when people were beginning to use video in a different capacity, crossing over to the art world and working in the same vein as Bill Viola, Gary Hill and Nam June Paik. Peter eventually left CalArts to attend the American Film Institute in Los Angeles as a directing fellow. After a stint working for a music video production company, a job he hated, Peter moved back to New Mexico and started writing feature-length scripts to keep his skills sharp.

One day, some friends asked him if he'd like to join them in staging an art show. Peter jumped in, and started experimenting with video sculpting. The experience thrilled him. "I'd been working for so many years trying to reinvent narrative as a filmmaker, and I didn't see at the time that one of the big things holding me back was the two-dimensional frame," he says. "Once I started experimenting with objects, immediately, the frame was breached. I saw all this energy and excitement spin past the frame into the round, if you will. I thought, maybe this is what I've been missing." And it was.

Since then, Peter has been transforming the act of watching video from an "experience-killing medium" to an "experience-creating medium." He's forcing a sense of self-awareness through audio/visual illusions. The exhibition shows a thematic bridge between the work of father and son. Peter says it's also bringing new light to his father's art, which has somewhat been in the shadows for the past 20 to 30 years since he hasn't made the leap into the online world.