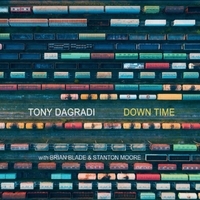 In the late 1980s, Tony Dagradi, who is most recognized blowing sax with Astral Project, played and recorded with the New Orleans Saxophone Ensemble, an all-star group that was modeled after the internationally-renowned World Saxophone Quartet. It included the late Earl Turbinton and Fred Kemp plus baritone saxophonist Roger Lewis. Dagradi returned to that format for his 2014 release, Gemini Rising, though for that outing he played the entire range of saxophones—soprano, alto, tenor and baritone—plus added drums. Down Time continues that instrumental concept with Dagradi as a one-man sax section with Brian Blade and Stanton Moore taking turns behind the drum set.

It opens with the leader’s composition, “Miles,” a pumpin’ tune Astral Project fans will probably recognize with Moore laying down the funk. What immediately jumps out on this selection—as well as many throughout the album—is Dagradi’s strength on bari, a horn audiences seldom hear him play. On several ballads, including his originals “Fallen” and “Too Soon” as well as the only non-original, a Dagradi favorite, the beautiful “My One and Only Love,” the saxophonist forgoes the drums for a melodic quietude.

Blade is onboard for the title cut, “Down Time” and makes good use of his mallets. Tonally they complement Dagradi whose baritone again plays a prominent role. This rhythmically textured tune at once suggests a laid back reggae attitude and then lightly swings in a modern mode.

The album goes out with the spirited “On the Savanna” that proves to be a fun way to end the altogether enjoyable Down Time.