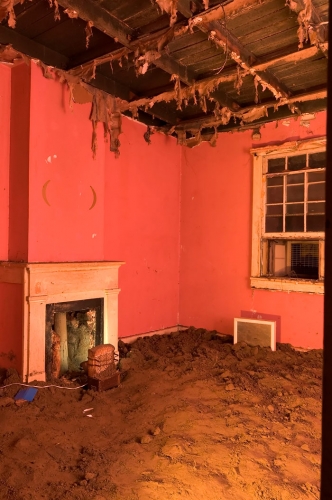 Drive through St. Roch, a tough New Orleans neighborhood northeast of the French Quarter, and you'll travel down street after street of shockingly dilapidated houses. Many are abandoned, some still marked by the spray-painted orange crosses of the rescue workers who searched for survivors—and bodies—in the days after Hurricane Katrina in 2005. In St. Roch, where 51 percent of the households had annual incomes of less than $20,000 before the storm, these tiny historic houses had long been in a state of decay. So maybe it's not surprising to come upon a shambles of a shotgun house that's filled with dirt.

But this isn't a vestige of disaster—it's an art installation. Kirsha Kaechele, 31, a kind of cultural impresario who moved into an abandoned bakery in St. Roch in 2002, has now bought half a dozen crumbling houses on or near North Villere Street—between two cross streets named, irresistibly, Music and Arts—and has been unleashing artists to create works in these derelict places. Inside the dirt house, artist Margaret Evangeline spread a foot and a half of soil, broke the kitchen pipes to spew water all over, then planted native seeds, which are beginning to sprout.