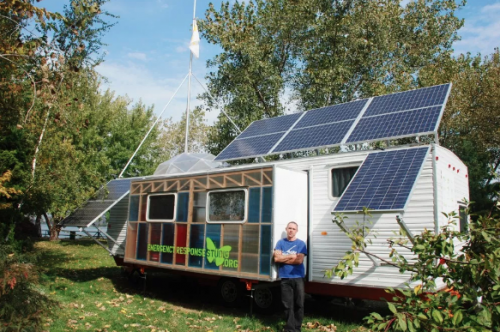 Inspired by post-Katrina New Orleans, New Yorker Paul Villinski created Emergency Response Studio (ERS), a FEMA-style trailer transformed into a fully functional, sustainably built mobile artist studio. His vision: a healthy space for visiting artists to embed themselves in post-disaster settings, and a prototype for what temporary housing can become.

Villinski purchased the 30-foot Gulf Stream Cavalier through the U.S. Goverment Accountability Office (GAO), the same agency that sold toxic FEMA trailers as provisional shelter after Katrina. Then, for seven months, he worked at gutting and re-envisioning the trailer using eco-friendly materials donated by more than a dozen sponsors.

The 48-year-old artist says that integrating mobility into his artwork is a natural progression. “I grew up an Air Force brat,” Villinski says. “We were always moving, road-tripping, packing things up … the gypsy life is in me.”

The result is a bright, inviting space that incorporates rather than excludes its surrounds. Inside, he insulated the ceiling with recycled pre-consumer denim scraps; crafted the kitchenette from Plyboo, a bamboo sheet material; and insulated the walls with mineral wool derived from blast furnace slag. While the trailer’s reclaimed plywood wall paneling isn’t green in the traditional sense, Villinski says it’s probably more sustainable because it was recycled locally.

Some of ERS’ most innovative features include a crank-down wall that lowers into a sturdy deck and expands floor space; a sub-floor encasement holding 1,300 pounds of batteries that store energy made by rooftop solar panels; and a geodesic skylight expanding headroom from 6½ to 10 feet. There’s also a tilt-down mast that supports a wind turbine, the original version of which Villinski built using MAKE’s instructions (see Volume 05, page 90).

After touring Texas this spring, ERS is headed for Wesleyan University in the fall, but not before catching some rest. “Believe it or not, I’ve never spent the night in it,” Villinski says. “I’d like to this summer.”