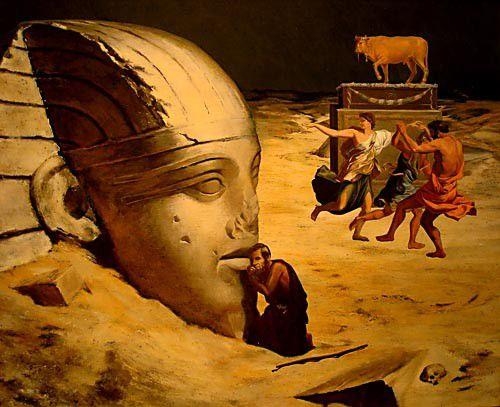 Wrong Sounding Stories is a wacky show. Rounding out a season of history-based exhibits, Adam Mysock applies his own artistic equivalent of genetic engineering to some well-known history paintings reworked to feature Abraham Lincoln in a starring role. For instance, his remake of Emanuel Leutze's Washington Crossing the Delaware is very similar to the original, and his deft brushwork insinuates an "old master" touch, but yes, that's Lincoln's head on Washington's torso. And that vague glint in the distance is a motorcycle doing a wheelie. Some less famous originals may prove more amenable to this approach. Elihu Vedder's mystical 1863 painting, Questioner of the Sphinx, depicts a traveler from the past with his ear pressed to the Sphinx's lips as if awaiting an oracular revelation, only here he has Lincoln's head as mythic dancers cavort around a golden calf in the background. An accompanying Bible quote, "And there was a famine in the land and Abram went down into Egypt ..." is typically zany, but not as much as his remake of Whistler's Mother with Lincoln dressed as Whistler's mom. While Mysock's nihilistic approach may be liberating in some ways, anything that suggests an attempt to fabricate history may inadvertently put him in the same boat with Rupert Murdoch, Fox News and the Tea Party despite his best philosophical intentions.