JONATHAN FERRARA GALLERY is proud to announce that the gallery will return to the VOLTA9 Art Fair in Basel, Switzerland, presenting a solo installation of new paintings by Adam Mysock, from June 10-15, 2013.  This will be the gallery’s second year exhibiting work at VOLTA9 as part of Art Basel Week in Switzerland.

Painter ADAM MYSOCK is fast becoming known for his finely detailed paintings which combine imagery from art historical masterworks along with pop culture icons and Americana.  His style is redolent of Mark Tansey’s in its juxtaposition of classical and modern imagery, yet Mysock’s works are painted miniatures, employing over 400 brush strokes per square inch and finished with 17 layers of clear coat to achieve a flawless gloss veneer.  The paintings are pristine and thought provoking, ruminating upon the shared border of myth and recorded history.  As Mysock has stated, “[My work is] ultimately about storytelling, the ownership and authorship of our culture's visual narratives, and the parallels between those tales, but my main role is to challenge the truth of "source" and the source of truth.”

Adam Mysock was born in Cincinnati, Ohio in 1983 - the son of an elementary school English teacher and a lab technician who specializes in the manufacturing of pigments. On account of a steady stream of folk tales from his mother, his father's vividly dyed work clothes, and a solid Midwestern work ethic, he developed an interest in painting and drawing all things Americana from a very early age. Mysock earned a Bachelor of Fine Arts degree in Painting and Art History from Tulane University and received an MFA from Southern Illinois University at Carbondale.

After his studies, he became the mural coordinator for the City of Cincinnati's MuralWorks mural program and worked as an adjunct drawing professor at Sinclair Community College in Dayton. He is a Professor of Practice at Tulane University where he currently teaches and maintains a studio. Mysock's work has been exhibited in Ohio, Kentucky, Illinois, Georgia, Mississippi and Louisiana and is in private collections across the US.  He was a 2009 jury winner in the annual No Dead Artists juried exhibition and 2012 he was awarded “Best in Show” at the Ogden Museum’s Louisiana Contemporary Annual Juried Exhibition. Mysock exhibited at Pulse Miami Art Fair in December 2012 and was selected for the 2013 Edition of New American Paintings. In September, his work will be exhibited at the Dishman Art Museum at Lamar Univeristy in Beaumont, Texas.  Adam Mysock lives and works in New Orleans and is represented by Jonathan Ferrara Gallery.

At VOLTA9, the gallery will present works from three series of works by Mysock, Wrong Sounding Stories, A History of Missteps and Backward, Inward, Outward, Forward.

Of his latest series, the artist says:

I'm told that long ago our ancestors spent a great deal of time looking up at the night sky, bonding with the celestial lights that passed overhead, and relating those distant forms to the mythology of their time. It’s noteworthy, however, that after generations of dreaming about those astronomical bodies, after generations of yearning to visit our celestial neighbors, something happened after we made it to the moon.  We lost interest; once the inaccessible became accessible, it lost its luster.  Since the last man walked on the lunar surface more than 40 years ago, we've lived in an age of declining fascination. Somehow, it seems, we spoiled the mystique of the heavens by visiting the moon. That's precisely where the visual conversations in my most recent work begin.  Throughout the paintings, I examine the motivations, rewards, and realities of exploration and ambition.  Whether transforming the moon into the characters of an elusive narrative or veiling Space Race illustrations as a means of measuring past enterprise against present inquiry, each piece tests the perspective from which we progress. Looking backward, inward, outward, and forward, the work quietly asks where we are and what we're going to do about it.

VOLTA9 is hosted at the Dreispitzhalle venue located at Helsinkistrasse 5, Gate 13, 4142 Münchenstein/Basel, Switzerland during the week of Art:Basel. The fair is open to the public on Monday 10 June from 2:00pm - 7:00pm and Tuesday 11 June to Saturday 15 June from 10:00am - 7:00pm.  Jonathan Ferrara Gallery will be exhibiting at Booth A21 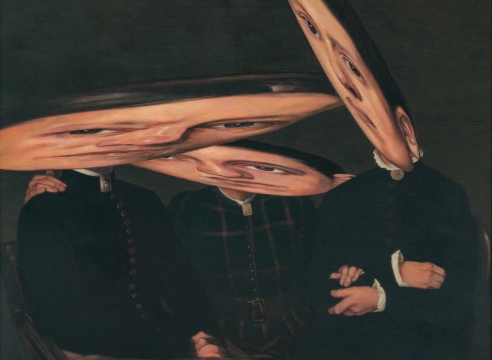