ADAM MYSOCK
And the LORD said unto Abram, after that Lot was separated from him,
Lift up now thine eyes, and look from the place where thou art northward,
and southward, and eastward, and westward, 2011
acrylic on panel
16 x 22 inches

This piece is about redirection. While inserting Lincoln into Eastman Johnson’s In the Fields, it became quite apparent that emulating Johnson’s paint handling would make it quite difficult to capture a likeness. I needed to clarify Lincoln’s face in order to give him an identity. To overcome the obvious stylistic discrepancies, bizarre elements of Massimo Stanzione’s The Sacrifice of Moses were inserted to pull attention right, most specifically the pointing Moses. Baseball player Pat Burrell (of the 2010 World Series Champion San Francisco Giants) stands in his appropriate position – left field – assisting in the redirection by pointing to the opposite side. As a baseball player, Burrell’s presence in the field is logical, even if his appearance is unexpected.

ADAM MYSOCK
And Abraham looked toward Sodom and Gomorrah, and toward
all the land of the plain, and beheld, and, lo, the smoke of the
country went up as the smoke of the furnace, 2011
acrylic on panel
16 x 20 inches

In a rather straightforward way, there are three parallel stories of food scarcity presented here. The top half of the composition comes from J. M. W. Turner’s Fifth Plague of Egypt. The fifth plague was a disease on the cattle of the Egyptians. The lower half is a cropped section of Thomas Eakins Mending the Net, in which fishermen mend holes in their net. In both cases a staple of nutrition is absent. The third reference highlights a more contemporary (and trivial) understanding of food scarcity – the recurrent disappearance/reappearance of McDonald’s McRib. On the extreme left, Lincoln walks carrying a basket subtly suggesting his role as savior or provider in times of need.

This image begins with two allusions to the divinity of nature. Most noticeably, the figure of Moses crouching in the foreground was taken from Sébastien Bourdon's Moses and the Burning Bush, an episode where God speaks to Moses through a plant. Serving as a stage for Moses, George Inness’s Evening at Medfield, Massachusetts, was supposedly a manifestation of the artist’s belief in the idea that nature was a direct link between the material world and the divine (a belief that resulted in a very particular “glow” from many of Inness’ paintings). In further considering the idea of divinity and nature, the tall tale of Johnny Appleseed came to mind (many versions of which reference Appleseed as a preacher as well as an obsessive, pot-wearing gardener). Because of the darkly silhouetted forms in Inness’ painting and Moses’ posture of covering his eyes, it made sense to conceal elements from a Highlights For Kids Hidden Pictures drawing featuring Johnny Appleseed throughout the composition.

ADAM MYSOCK
So Abram departed, as the LORD had spoken unto him;
and Lot went with him: and Abram was seventy and five
years when he departed out of Haran, 2011
acrylic on panel
16 x 14 inches

This piece began with two stories about striking a rock to get water – that of Moses from Exodus and that of the S.S. Minnow of Gilligan’s Island. In Exodus, Moses responds to the thirsty complaints of the wandering Israelites – he strikes a rock with his staff and water pours out (seen here in the background to the right from Abraham Bloemaert’s Moses Striking the Rock). In Gilligan’s Island, the S.S. Minnow strikes a rock and water pours in. In both, the rock/water combination serves as both reminder of death (dehydration or drowning) and the instrument for the affirmation of life. The main image for this piece, Winslow Homer’s Basket of Clams, offers another look at striking a hard surface in order to establish a relationship between life and death – the idea of tapping an opened clam on the shell to see if it will close (a sure sign it’s alive and edible).

ADAM MYSOCK
And lo, three men stood by Abraham: and when he saw [them], he ran to meet them from the tent door, and bowed himself toward the ground, 2011
acrylic on panel
11 x 12 inches

This image really began with my knowledge of the American artist of the source painting – William Sydney Mount. While Mount is acknowledged as one of the first painters to present African- Americans in a positive light, his beliefs about slavery were at odds with Abraham Lincoln’s. In response, he seems to have wrestled with the good and evil aspects of his beliefs. The imagery of Moses on his knees (from Domenico Beccafumi’s Punishment of Korah, Dathan and Abiram) comes from a similar narrative about a struggle between good and evil. In it, Moses’ divine connections were challenged by tribal leaders and as a result the earth split open and swallowed the malicious contenders, leaving only the good.  William Sydney Mount’s painting of The Banjo Player serves as a stage that hints at both something positive (the musical reference) and something negative (figures emerging on their knees, as if being released from captivity.) The musical poster (from 1979) is intentionally playful to offset the otherwise tense environment and may reference Lincoln’s action here, a similarity between Moses’ bearded likeness and that of Charlie Daniels, or the connection between a “pure prairie” and the gathered hay in the background.

JONATHAN FERRARA GALLERY is pleased to present Wrong Sounding Stories, New Paintings by ADAM MYSOCK. This is Mysock's second solo show at the gallery, following his sold-out show Mythconception in April 2010. The exhibition is on view from June 2 through July 20, 2011 and opens with a reception to meet the artist on Saturday June 4th from 6-9pm.

Each work in this exhibition is titled with a section of Abraham's narrative from the Bible. Using this biblical base, the paintings become tongue-in-cheek re-imaginings of canonized American lore. Abraham Lincoln, "our country's predominant symbol of honesty" is heavily featured in this series as, in the artist's words, "wherever he shows up, there's an assumption of authenticity".

My main effort here has been to address truth by examining its opposite. I've pushed America's icon of honesty - Abraham Lincoln - to become an inaccurate main character in famous American paintings created by artists working during his lifetime. The certainty of time is altered by the Old Testament Art Historical references residing next to modern symbols. Taken as a whole, varying degrees of disruption to the original works draw attention to a hierarchical range of truth; obvious lies provide cover for more subtle ones.

ADAM MYSOCK was born in Cincinnati, Ohio in 1983 - the son of an elementary school English teacher and a lab technician who specializes in the manufacturing of pigments. On account of a steady stream of folk tales from his mother, his father's vividly dyed work clothes, and a solid Midwestern work ethic, he developed an interest in painting and drawing all things Americana from a very early age. Mysock earned a Bachelor of Fine Arts degree in Painting and Art History by 2004 from Tulane University. He then received an MFA from Southern Illinois University at Carbondale. 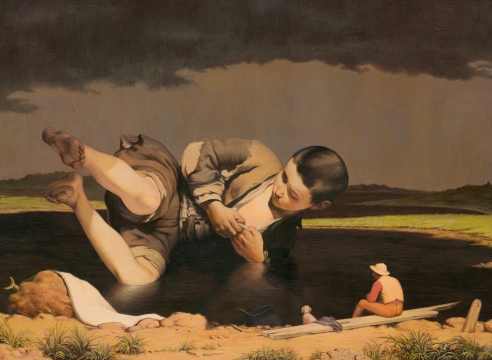